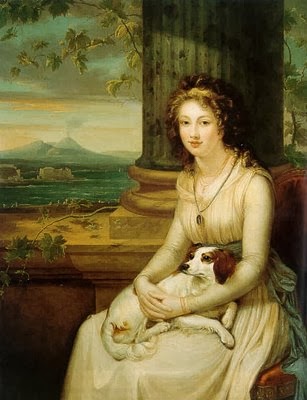 When it came time for Elizabeth to marry, her parents settled upon a baronet in England, Sir Geoffrey Webster who just happened to be 23 years older than fifteen year old Elizabeth. The teen was carted away to the opposite hemisphere to become mistress to the imposing Battle Abbey, it must have been quite the shell shock for a plantation girl from Jamaica.

Sir Geoffrey himself was no prize. He was a depressed fellow (quite opposite from his young bride) who was prone to jealousy, drink, and gambling. Children followed the marriage but so too did physical abuse. It wouldn’t be risky to say this could have been the result of Elizabeth’s stubborn, acid-tongue ways. She was not the type of lady to refrain from defending herself or at least stating her opinions! Sir Geoff also came with baggage: his mother. Elizabeth hated the old bag. The feeling was reciprocated. Open warfare soon developed between the two Lady Websters. Elizabeth would inquire daily as to whether the “old hag was dead yet.” Harsh! She would also try and scare her out of the house with ghostly pranks. There is even a story of Elizabeth going so far as to stage a prank that the French had invaded the cost, employing friends and such, dressed as commoners, to run toward the abbey with carts, screaming bloody murder. The dowager Webster invited them in for food and drink and told them to let the French know they would be treated the same and she could be found there until her death. Ha!