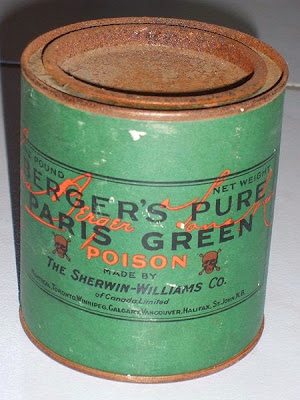 Emerald Green, or Paris Green, was a very popular pigment in the Regency Era. It was also deadly, as Vic reminds us over at Jane Austen’s World. To quote:

Eventually, the use of this pigment was abandoned when it became generally known that people who wore clothes dyed with the substance tended to die early. To this day the French avoid making green theater costumes. Emerald green was also used to color confectionary and cake cake decorations.

Wallpaper made with Scheele’s green was deadly, By 1830, wallpaper production had risen to 1 million rolls a year in the UK, and by 30 million in 1870. Tests later revealed that four out of five wallpapers contained arsenic. Leopold Gmelin (1788-1853), a famous German chemist, suspected as early as 1815 that wallpaper could poison the atmosphere. He noticed that the substance gave off a mouse-like odor when the paper was slightly damp. Gmelin warned people to strip their rooms of the paper and advocated banning Scheele’s green, but he was too far ahead of his time.

In 1861, Dr W. Fraser tested wallpaper that contained arsenic.The threat, he said, came from breathing the dust of the papers, especially flocked wallpaper. The warnings went unheeded, and by 1871, arsenic production had increased to the point that Britain had become its largest producer and consumer.