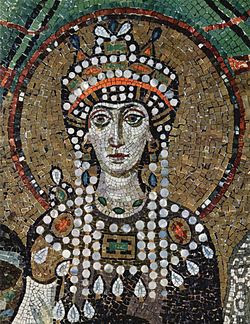 Elizabeth K Mahon, author of Scandalous Women, has written an interest post about the Empress Theodora, the actress and courtesan who married the Emperor Justinian:

Justinian was 40 when they met, devout and studious. He fell in love with her because of her wit, beauty, and amusing character but he was prohibited from marrying her. Apparently there was some law preventing patricians from marrying actresses. While his uncle Justin I was willing to amend the law, his wife the Empress Euphemia was against the idea. Apparently it brought up old memories; Euphemia had been a slave before she became Empress. Once Euphemia passed on in 525 AD, Justin was free to repeal the law. The law freed truly penitent actresses from all blemishes and restored them to their pristine state.

Theodora soon showed what she was made during what came to be known as the ‘Nika’ riots. In 532, the Blues and the Greens started a riot in the Hippodrome during a chariot race. The rioters had many grievances, some of which stemmed from Justinian and Theodora’s own actions. The rioters set many public buildings on fire, and proclaimed Hypatius (who was the nephew of the former emperor Anastasius I) as the new emperor. Unable to control the mob, Justinian and his officials suggesting fleeing the capitol but Theodora declared that she would not flee. She pointed out the significance of dying as a ruler rather than living in exile or hiding. She famously declared that ‘purple makes a fine shroud.’ Because of her speech, Justinian ordered his troops to storm the Hippodrome, killing 30,000 rebels including Hypatius. After his victory, Justinian gave Theodora real power, making her his co-ruler and the most powerful woman in the Byzantine Empire. He never forgot that his was Theodora who had saved his throne. Theodora became Justinian’s right-hand, and his honored counselor.

Together she and Justinian rebuilt and reformed Constantinople, building bridges and aqueducts, bridges and more than 25 churches including the Hagia Sophia. Byzantine Empire prospered for 19 years under their rule. As Empress, Theodora used her power to close brothels, crack down on forced prostitution, she opened a convent where ex-prostitutes could support themselves, made rape punishable by death, forbade killing wives for committing adultery, also expanded the rights of women in divorce and property ownership. She also forbade the exposure of infants, and gave mothers some guardianship rights over their children. Procopius wrote that she was naturally inclined to assist women in misfortune. As a result of her efforts, women in the Byzantine Empire had far more status than women in the Middle East and the rest of Europe.