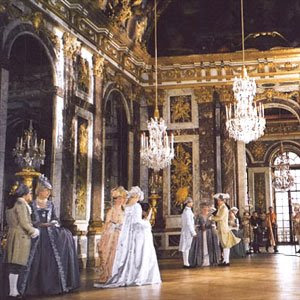 Versailles may have been one of the most glamorous courts in Europe, if not in the world, but living there wasn’t always easy or pleasant. Every little aspect of life was, in fact, strictly regulated by an elaborate, and stifling, set of etiquette rules. Paris Atelier explores some of them. To quote:

*People who wanted to speak to the king could not knock on his door. Instead, using the left little finger, they had to gently scratch on the door, until they were granted permission to enter. As a result, many courtiers grew that fingernail longer than the others!

*When a gentleman sat down, he slid his left foot in front of the other, placed his hands on the sides of the chair and gently lowered himself into the chair. The practical reason for this procedure was that if he sat too quickly, his tight trousers might split.

*The king and queen always had a fauteuil (armchair) to sit on. In their presence, no one else was allowed an armchair, unless you were also a monarch.

* Only ushers were allowed to open doors. If you desired to leave the room, you had to wait for the usher to open the door.

*People of different rank were to enter a room in order, princes, then officers of the Court, and finally courtiers. The page opened both halves of the tall double door for a prince, but for lower ranked dignitaries, only one side swung open.

*The Grand~Couvert was a daily public ritual, where the King and Queen would eat their dinner in public. Anybody could attend (anybody of any rank) provided they were dressed properly, for men, this meant wearing a sword. You could rent one at the gates! Marie~Antoinette famously hated this ritual (meant to signify that the Sovereigns were at the disposal of the people) and was frequently criticized for not even removing her gloves. She often picked at her food and had a second meal served in her private chambers with her friends.

No wonder Marie Antoinette found it suffocating and enjoyed spending a lot of her time at the Petit Trianon, where etiquette was more relaxed!