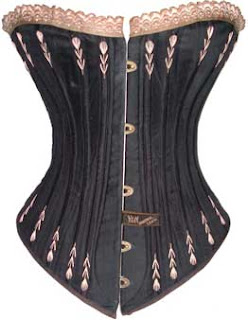 Collectors Weekly debunks some myths about corsets. To quote:

2. Corsets did not create misshapen livers or life-threatening diseases.

Over the years, corsets have been credited with causing a whole litany of health problems. It’s been said that they misshape internal organs and cause cancer. Other illnesses attributed to corsets were fake, sexist conditions, like “hysteria.” There’s also no record of a woman having a rib surgically removed so she could better fit into a corset, which is a particularly absurd myth, given how deadly surgery was in the 1800s.

Of course, they weren’t exactly the healthiest things to wear every day, either. They did force organs to shift around, cause indigestion and constipation, and eventually weakened back muscles. And they didn’t leave a lot room for pregnant women’s fetus-incubating bellies. But deadly they were not. They also didn’t prevent women from doing their work—any more than, say, stiletto heels do.

“Most people today think corsets were extremely dangerous and caused all kinds of health problems, from cancer to scoliosis,” Steele says. “And that’s quite inaccurate. Most of the diseases that have been credited to corsets, in fact, had other causes. Corsets did not cause scoliosis, the crushing of the liver, cancer, or tuberculosis. It doesn’t mean that corsets were without any health problems, but it does mean that most modern people are wildly naive in believing the most absurd antiquated medical accusations about corsetry.

“For example, the idea of the misshapen liver seems to be a mistake based on the fact that there is a lot of variation in the shape of livers. When doctors did autopsies, they would see these weird-looking livers and they’d go, ‘That was caused by the corset.’”