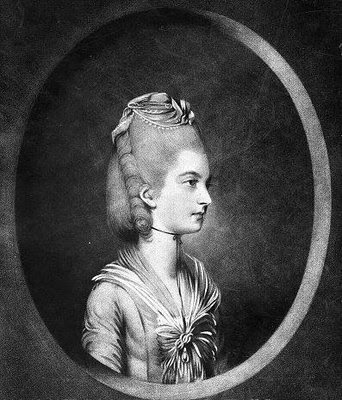 Heather Carroll has written an interesting post on Lady Jersey, the mistress of the Duke of Devonshire and the Prince Regent, the future King George IV. To quote:

Her most famous affair was, of course, with the Prince of Wales. From 1794 to 1798 she was his main squeeze. In fact, it was she who broke up the prince’s relationship with Mrs. Fitzherbert. The satirical cartoonists had a field day depicting the chubby prince canoodling with a haggish grandmother (Frances was over 40 when the affair began). Frances turned out to be more than just an outlet for the prince’s carnal desires. Like Camilla with Prince Charles, she convinced Prince George to marry Caroline of Brunswick because she didn’t think her to be a threat. She even became Caroline’s Lady of the Bedchamber, much to Caroline’s dislike. Frances continued her habit of torturing wives. The Prince took two pearl bracelets from Caroline’s wedding jewels on the wedding day and gave them to Frances who made sure to always wear them in Caroline’s presence. From day one, Frances was involved in the marriage and therefore a huge reason for it’s ill-success.