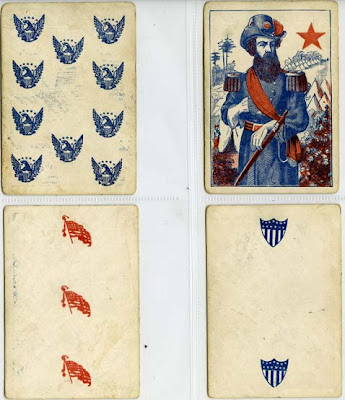 What gadgets and gimmicks were available to soldiers and civilians during the American Civil War? Wonders And Marvels investigates. To quote:

During the first few weeks of April 1861, even before the smoke of Fort Sumter had faded, the greatest assemblage of hucksters in the nation’s young history began hawking an eclectic variety of wares. The mid-19th century, with its rapid proliferation of daily newspapers and the penny press, marked the first time people recognized the opportunity to commercialize a war effort, to infuse patriotism with the spirit of consumerism, and advertisements were typically more imaginative than true. While many inventors and pitchmen genuinely hoped to improve soldiers’ comfort and convenience, others took advantage of an unsophisticated public caught up in jingoistic fervor. Below, a sampling of goods and gadgets available to both soldiers on the front lines and those cheering them on:

• A number of products promised to ease the hardship and privations of camp life. If a solider could handle the extra 15 pounds he might carry Milligan’s Patent Mess Kettle, complete with its 18 cooking utensils. There was also Strong’s Patent Army Trunk and Portable Bedstead, one of many brands of a combination folding cot, lounge, and camp chair that could be neatly collapsed into a two-foot bundle. John Wheeley Lea and William Henry Perrins, the men behind Lea & Perrins Worcestershire Sauce, hoped to make their product a staple at camps by vowing it would “add greatly to the health of the soldier!” The makers of Dr. Holloway’s Ointment promoted their product’s ability to heal everything from smallpox to saber cuts to gunshot wounds. Soldiers seeking a temporary escape partook of “hasheesh candy,” 25 cents per piece or $1 per box, which purported to be “a most wonderful Medicinal Agent for the cure of Nervousness, Weakness, Melancholy, Confusion of thoughts, etc. Under its influence all classes seem to gather new inspiration and energy.”