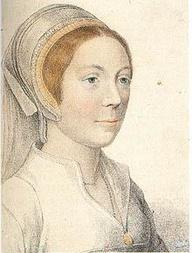 Over at The History Files, Conor Byrne explains why, to fully understand Henry VIII’s fifth wife, the young Catherine Howard, we need to take into consideration her genre. To quote:

As has been noted, none of the four males involved in Katherine’s sexual life assumed responsibility for his actions; in all, she was portrayed as a whore. The likelihood was that in the spring of 1541, when the king was suddenly taken ill, the queen experienced mounting worry, even a spell of loneliness, and turned to her family relation Culpeper for comfort. Yet they never passed beyond talk, as has been suggested by some historians. Court politics and gender intertwined at this time, as Katherine sought the assistance of Lady Rochford, as Lady of the Bedchamber the closest female attendant to the queen, to communicate with her relative. The arrival of Dereham at court in the summer proved dangerous for the queen’s security, as he boasted that he was “of her counsel” before she married the king, probably viewing her as his lawful wife. A comment made by Mary Lascelles, Katherine’s childhood companion, to her brother about the queen’s childhood led to Archbishop Cranmer becoming aware of Katherine’s pre-marital indiscretions. If she had been married to Dereham, then she was never the king’s wife and could merely have been divorced. Probably viewing that period as a regrettable time, Katherine stated that they had never been married. When pressure was put on the queen’s ladies by the Council about her night time meetings with Culpeper, they emotionally claimed that noises of lovemaking had been heard, almost certainly fabrications desired by the Council who viewed the queen as a harlot.

Tragically, Katherine and Lady Rochford were both executed in February 1542, the queen aged around eighteen and her attendant about thirty-six. These followed the brutal executions of Culpeper and Dereham; surprisingly, Culpeper suffered the more merciful method of beheading, despite the fact that he had committed the worse crime of supposedly intending to pass off his bastard as the king’s, while Dereham was hanged, drawn and quartered, probably because with knowledge to his earlier relationship with the queen, the Council implied that they had intended to resume carnal relations. It is possible that both ladies suffered mental breakdowns when imprisoned, while the queen was reported to be extremely physically weak on the day of her execution, although film adaptations which portray her as screaming with fear are probably inaccurate.

Prioritising gender history in relation to Katherine’s life clarifies both her and her circumstances. She was almost certainly not the oversexed adolescent she is frequently depicted as being, but a naive young woman who desired to forget her regrettable childhood and genuinely fulfil her role as queen successfully, largely through bearing a son. Viewing her life narrowly through a political and masculine focus obscures reality. If this is done, then one is left with the interpretation put forward in accounts by historians such as Baldwin Smith who, through relying on the Council’s interrogations and court documents, ultimately agree with those interrogators that Katherine was a manipulative harlot who exploited her sexual fascination mercilessly over Dereham, Culpeper and, worst of all, the king, in order to achieve her sinful goals. Yet if gender is interpreted too radically in the feminist direction, a similarly incorrect portrayal of the queen sees her as a modern young woman who listened to her body’s yearnings: “She was willing to risk whatever it took to be true to herself… that her image remains so tarnished says more about our failure to accept female sexuality than about Kathryn Howard’s morality”.

Correct attention to contemporary mores about female sexuality and gender, intertwined with court politics, suggests that fertility was the centralising factor in both Katherine’s rise and fall. She became queen in order to fulfil the king’s hope that she would produce a second male heir, should anything compromise the safety of his prince, and she lost her crown because she was unable to produce that heir and because her almost certainly innocent meetings with Culpeper, and past relations with Dereham, were construed as evidence that she intended to resume carnal relations with both, thus jeopardising the Tudor succession.