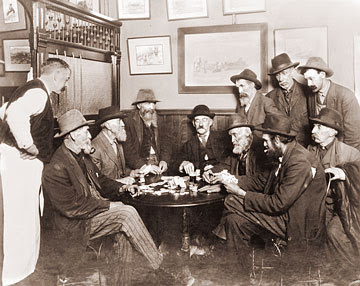 The Art Of Manliness remembers some colourful words and phrases used by men in the 19th century. To quote:

Bully Trap. A brave man with a mild or effeminate appearance, by whom the bullies are frequently taken in.

Flying Mess. “To be in Flying Mess ” is a soldier’s phrase for being hungry and having to mess where he can.

Gentleman of Four Outs. When a vulgar, blustering fellow asserts that he is a gentleman, the retort generally is, ” Yes, a Gentleman Of Four Outs”—that is, without wit, without money, without credit, and without manners.

Keep a Pig. An Oxford University phrase, which means to have a lodger. A man whose rooms contain two bedchambers has sometimes, when his college is full, to allow the use of one of them to a Freshman, who is called under these circumstances a PIG. The original occupier is then said to Keep A Pig.

Pocket. To put up with. A man who does not resent an affront is said to Pocket it.