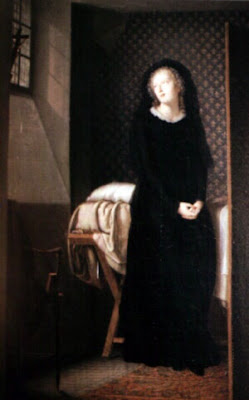 Vive La Reine shares the testimony of Chauveau Lagarde, one of the attorneys that defended Marie Antoniette at her trial. To quote:

In presenting myself to the Queen with respectful devotion, I felt my knees trembling under me and my eyes wet with tears. I could not hide my emotion and my embarrassment was much greater than any I might have felt at being presented to Her Majesty in the midst of her court, seated on a throne and Surrounded with the brilliant trappings of royalty.

Her reception of me, at once majestic and kind put me at my ease and caused me to feel, as I spoke and she listened, that she was honoring me with her confidence.

I read over with her the bill of indictment, which later became known to all Europe. I will not recall the horrible details.

As I read this satanic document, I was absolutely overwhelmed, but I alone, for the Queen, without showing emotion, gave me her views on it. She perceived, and I had come to the same conclusion, that the gendarme could hear something of what she said. But she showed no sign of anxiety on this score and continued to express herself with the same confidence.

I made my initial notes for her defense and then went up to the registry to examine what they called the relevant documents. There I found a pile of papers so confused and so voluminous that I should have needed whole weeks to examine them.

When I observed to the Queen that it would not be possible for us to take cognizance of all these documents in such a short time and that it was indispensable to ask for an adjournment to give us time to examine them, the Queen said, “To whom must we apply for that?”

I dreaded the effect of my reply, and as I replied in a low voice: “The National Convention,” the Queen, turning her head to one side said: “No, never!”…

I added that we had to defend in the person of Her Majesty not only the Queen of France, but also the widow of Louis XVI, the mother of his children and the sister-in-law of our Princess, who were accused with her in the bill of indictment.

This final consideration overcame her scruples. At the words sister, wife and mother natural feelings rose superior to a sovereign’s pride. Without uttering a single word, though she let a sigh escape her, the Queen took up her pen and wrote to the Assembly in our names, a few lines full of noble dignity in which she complained that they had not allowed us time enough to examine the evidence and claimed on our behalf the necessary respite.