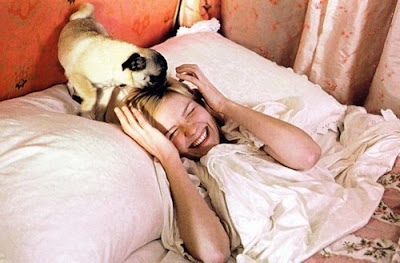 The little spaniel, known as Thisbe, was with the queen and her family when they were imprisoned in the Temple. When Louis XVI was guillotined, the pup stayed with the queen and her children, and still when the children were taken. Only were they separated when Marie Antoinette was moved to the Conciergerie.

Well you can’t keep a pup from his owner, and little Thisbe tracked down the door to where Marie Antoientte was held. He sat outside all day. People began to talk about just who the dog was waiting for, “The queen herself…” […]

When the doors finally opened, a cart of people rolled through. This remarkable animal, recognizing his owner, followed this cart through the streets, and wandered around as the prisoners were unloaded.

“The Queen’s head fell-there was a moment’s dead silence-then the loud, agonising howl of a dog. In an instant, a soldier’s bayonet pierced its heart. “So perish all that mourn an aristocrat” he cried; and mourning indeed an aristocrat died. Thisbe le chien de la Reine.”