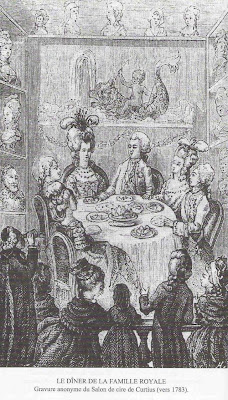 Did Marie Antoinette really eat lots of macaroons and sweet pastries like portrayed in the Sofia Coppola’s movie? Or did she have simpler tastes? Viva La Reine shares what the Queen’s favourite foods were:

In the mornings, Marie Antoinette preferred coffee or hot chocolate, sometimes accompanied by simple bread. The bread she ate was possibly kipfel, a type of Austrian bread which is considered an early form of the croissant or it may have been an earlier form of kaisersemmel, more commonly known today as a Kaiser roll. Although popular legend has it that Marie Antoinette brought the croissant to France from her native Austria in the form of comfort food, this is likely a simple legend, because the croissant was not mentioned in records of French cuisine until the mid 19th century.

When Marie Antoinette was obliged to dine in public, which was the custom for the royalty at Versailles, she hardly touched the food presented to her. Typically, the food served during these ceremonial meals were elaborate court dishes which were meant to illustrate the majesty and wealth commanded by French monarchy. Although her husband ate at these public meals with gusto, Marie Antoinette often waited until she was able to retreat to her private apartments to eat her meals.

Privately, Marie Antoinette preferred foods which were much less extravagent than the court meals served at the grand couvert. She enjoyed meals of boiled or roasted white meat, especially chicken or fowl, accompanied by cooked vegetables. She was also fond of broths and simpler soups. She did not drink alcohol with much frequency, if at all, and preferred lemonade or water imported from Ville d’Avray for its purity. She also liked to dip small biscuits in her water or lemonade. She sometimes drank cow or donkey’s milk, especially for health purposes.