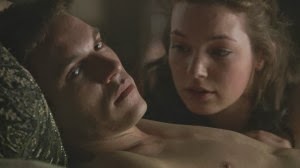 It appears to have been a known fact that Henry VIII had slept with Anne’s sister, but this doesn’t help us to date the relationship in any way. Most historians date the relationship to the 1520s, beginning in 1522. This is because at the Shrovetide joust of 2nd March 1522 Henry VIII rode out with the motto Elle mon Coeur a navera, or “She has wounded my Heart”, embroidered on the trappings of his horse. A woman had obviously rebuffed his advances, but we cannot be sure that it was Mary, who, by this time, was married to William Carey. Mary could well have been just a one night stand when Elizabeth Blount, the King’s former mistress, was pregnant with the King’s son in 1519, they may not have had a long-lasting affair at all but the King still needed to declare the impediment whether the relationship had been one night, two nights or many nights.

Evidence that is used to back up the idea that Mary was Henry VIII’s mistress from 1522, during her marriage to William Carey, and that one or both of her children were fathered by the King, is the list of grants and offices that Carey was granted between 1522 and his death in 1528. Carey was indeed awarded many lucrative grants and offices, including keeperships and manors, and he also kept his post of Gentleman of the Privy Chamber through Cardinal Wolsey’s 1526 purge, the Eltham Ordinances. However, Carey was related to the King and was a favourite. Henry Norris, another Gentleman of the Privy Chamber at this time, also survived the Eltham Ordinances, being promoted to Groom of the Stool, and was granted a host of royal grants, keeperships and offices, but nobody suggests that his wife, Mary Fiennes, was sleeping with the King or that his children, born between 1524 and 1526, were the King’s bastards. Henry VIII was generous to those who served him and William Carey was a loyal servant to him. We can’t read too much into these rewards.