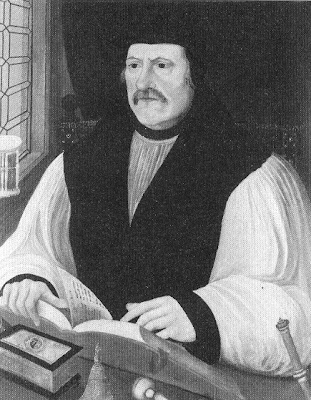 Stephanie Mann, author of Supremacy And Survival Blog, has written an interesting post about Matthew Parker, chaplain of Anne Boleyn and later Archbishop of Canterbury. It was to Parker that Anne Boleyn asked to make sure her daughter Elizabeth was well-looked after should anything happen to her. To quote:

When Henry VIII died, Parker got married; under Edward VI he supported the efforts of John Dudley, the Duke of Northumberland to continue the reformation. He became friends with Martin Bucer and preached his funeral sermon in 1551. When Mary I came to the throne, Parker lost all his benefices because he was married, but he was otherwise free and did not seek exile. Even though he had been close to Northumberland he was not arrested or harrassed in any way during Mary’s reign.

Elizabeth I named him Archbishop of Canterbury in 1559; he was never involved in matters of state and never part of her Privy Counsel. He struggled throughout his tenure to maintain uniformity in the Church of England and against the puritan reformers who wished to eliminate any vestiges of Catholicism in the established Church. For instance, the issue of clerical vestments during Book of Common Prayer services involved Parker in controversy that he thought interferred with the true course of reform.