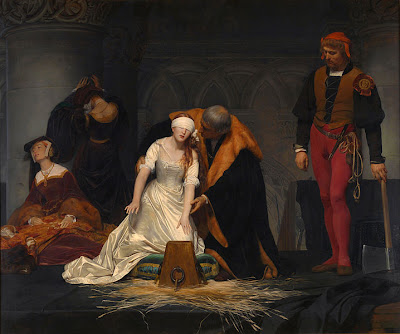 Author Susan Higginbotham sets the record straight on some myths about Lady Jane Grey’s and Guildford Dudley’s executions. To quote:

1. Philip of Spain, Queen Mary’s fiancé, insisted upon Lady Jane’s execution before he would marry the queen.

Philip’s supposed insistence upon Jane’s death before he would wed Mary has often been used in novels and in the film Lady Jane to depict Mary as a pathetic, aging hag so desperate for love that she would sacrifice a young girl’s life to keep from losing a prospective husband. Mary’s council did indeed urge the queen to execute Jane, and Simon Renard, the imperial ambassador, was clearly pleased at her decision to do so. But there is no evidence that Philip or his father, the Emperor Charles, demanded Jane’s death as a precondition to marriage or indeed that they even had a chance to do so, given the short period of time between the collapse of Wyatt’s rebellion (the uprising which sparked the decision to execute Jane and Guildford, who had been sentenced to death the previous year) on February 7 and the executions on February 12. Indeed, the decision to execute the couple appears to have been taken before the rebellion had even ended: Renard, writing to the emperor on Thursday, February 8, to report the collapse of the rebellion, believed that Jane and Guildford’s executions had been ordered for the previous Tuesday—February 6—but did not know whether they had been carried out. Renard’s letter to Charles on February 13 mentions Jane’s and Guildford’s deaths the day before almost offhandedly: “Since then it has been discovered that 400 or 500 gentlemen and others had a share in the plot, so the prisons will not suffice to hold them all. Yesterday Courtenay, chief of the conspiracy according to Wyatt, was committed to the Tower, and the Lady Elizabeth set out to come hither. She is expected to-morrow with an escort of 700 or 800 horse, and it is believed that she will soon be sent to the Tower, where Jane of Suffolk was yesterday executed, whilst her husband, Guildford, suffered in public. To-day 30 soldiers, men of some standing, were executed as an example to the people.”

Mary may or may not have been reluctant to execute Jane and Guildford, but she was certainly capable of resisting imperial pressure, as her refusal to execute her sister Elizabeth despite Renard’s urgings shows.