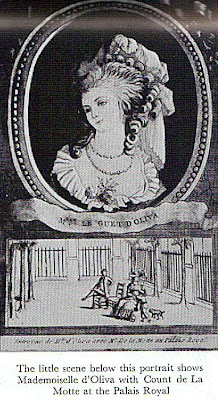 Marie Antoinette’s Diamonds, a blog dedicated to the Affair of the Diamond Necklace, has an interesting post on Nicole D’Oliva, the prostitute who impersonated Marie Antoinette in the gardens of Versailles, tricking Cardinal Rohan into believing the Queen had forgiven him and really wanted his help in obtaining the famous diamond necklace:

Finally, she met the Comtesse and was asked to help in a little task that the Queen had asked the Comtesse to complete. They were to put on a small theatrical production in the gardens of Versailles, which would be a joke and a secret. Nicole was told she would be paid fifteen hundred francs to take part. The queen would be watching and would be very pleased with Nicole if she played her role well. Nicole accepted.

In the summer of 1784, Nicole was dressed up in a white gown in the style “en gaulle” or “a la reine.” She was given a rose and a letter and taken to the gardens of Versailles. There, she was led into the dark gardens. The night was moonless. In the labyrinthine gardens, she was taken to the Queen’s Grove–not, in actuality, “The Grove of Venus”–and told to wait. Suddenly, a man approached her. She was told to give him the rose and say, “You know what this means.” She did so, but apparently forgot to give him the letter that she was meant to give him. Then the Comtesse interrupted them, saying someone was coming. Everyone scattered.

Or, it could be that Nicole really didn’t ask many questions. Fifteen hundred francs was quite a lot of money. She did not have to do very much to get it and must have figured it was best not to ask too many questions.