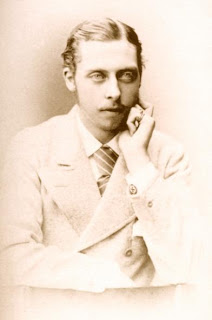 Victoria was determined to keep her son more or less wrapped in cotton wool—a condition which Leopold gamely fought all his life, trying as hard as he could not to be an invalid despite his condition (which included, in addition to the hemophilia, occasional epileptic seizures). With his brothers’ help he fought to be allowed to attend Oxford, and though he wasn’t allowed to complete a full course of studies there, enjoyed a fair sample of university life and made many friends—including a certain Miss Alice Liddell, better known to the world as the heroine of Alice in Wonderland. He became a favorite uncle to his sister Alice’s children, and even visited his favorite sister Louise to tour North America while her husband served as Viceroy of Canada.

Leopold and his mother continued to rub each other the wrong way, but it didn’t keep Victoria from employing him as a private secretary, her interface with her ministers. Though the work eventually came to interest Leopold and he became especially good friends with Benjamin Disraeli, he wanted more from life than to be constantly at his mother’s beck and call, and again with the help of his brothers and sisters, convinced Victoria that he should be allowed to marry and live his own life apart from her. After a good deal of consideration (and, alas, some refusals from eligible princesses) he became engaged to Princess Helen of Waldeck-Pyrmont. They were married in 1882, just after Leopold’s 29th birthday, and though they were barely acquainted, quickly became devoted to each other. They had a daughter, Alice, in 1883, who incidentally was the longest lived of Victoria’s’grandchildren, dying in 1981.