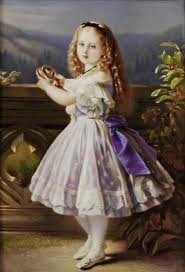 That pretty liveliness, however, was not destined to remain. The deaths of both the Queen’s mother and husband in 1861 plunged the Queen into gloom, and levity was not welcomed in her household. Gradually, Beatrice’s bright personality and intelligence were worn down, until by her teens, she had become very shy and almost tongue-tied in public and her natural grace dulled. Victoria’s older daughters had, one by one, escaped into marriage, but if the Queen had any say in the matter, Beatrice would not: she would remain at her mother’s side, serving as her personal secretary and companion for the rest of her life.

And so matters continued until 1884. Though Victoria assured everyone that Beatrice was quite content to remain “the daughter of the house”, there had been thoughts of marrying her off, possibly to Louis of Hesse, her late sister’s Alice’s widower. Finding a groom for Beatrice did not appear to be an easy prospect: she was chunky, awkward and gauche in public, and just not very attractive. But at a family wedding in that fateful year, Beatrice fell in love. Her choice was Prince Henry of Battenburg, a minor German princeling. In many ways, he was the perfect choice: he was more or less penniless and landless, and could therefore quite easily move to England and become Beatrice’s husband, rather than her leaving England to become his wife. So after six months of the Silent Treatment (quite literally!) on the Queen’s part, promises were extracted from Henry (nicknamed “Liko”) and Beatrice that they would always live with her, and the pair were allowed to marry in 1885.