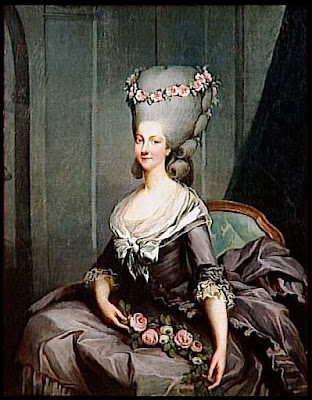 Melanie Clegg, author of Madame Guillotine, has an informative post on the Pricesse De Lamballe, Marie Antoinette’s friend, who was brutally murdered during the French Revolution. To quote:

The Princesse was born Maria Theresa Luigia di Savoia-Carignano in Turin on the 8th September 1749 to Luigi Vittorio di Savoia-Carignano, Principe di Carignano and his German wife Christine Henriette of Hesse-Rheinfels-Rotenburg. She was a cousin of the Savoyard royal family, which included the future Comtesses de Provence and Artois. Therefore this Princesse, who is often regarded as the ultimate French aristocrat was actually half Italian and half German.

She was married by proxy on the 31st January 1767 to Louis-Alexandre de Bourbon, Prince de Lamballe, the only son of the Duc de Penthièvre and great grandson of Louis XIV and Athénaïs de Montespan. The young prince was a dissolute libertine and died shortly after their marriage, presumably of venereal disease, leaving the unfortunate Princesse a widow at the age of nineteen.