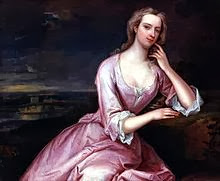 Author Elizabeth Kerri Mahon has written an interesting article on Henrietta Howard, Countess of Suffolk, who became the mistress of King George II to escape from a violent husband. To quote:

Soon she had another admirer, the Prince George, the Prince of Wales. Although the Prince loved his wife passionately, he felt that it was his duty to keep a mistress. He felt that it was as necessary an accessory to the monarchy as the crown and scepter. He also wanted to prove that he wasn’t completely under the influence of his wife, although everyone knew that he was. Princess Caroline had perfected the art of skillfully manipulating her husband. She would listen to him and nod her head, but oh so subtlety, she would make him think that her ideas were his. Everyone at court knew that she was the power behind the throne.

Henrietta was not the Prince’s first choice for a mistress; he had his eye on one of the Maids of Honor who turned him down flat. He wasn’t exactly Don Juan. Prince George was short and stocky with somewhat bulging eyes. His conversation was also boring; he would repeat the same stories ad nauseum. He was also a little OCD in that he liked routine, any deviation by even a minute and he threw a fit. George also liked to think of himself as something of a stud, he would regale his wife with stories of the women he’d seduced in great detail. Historians debate as to when Henrietta became George’s mistress, some speculate that the affair began back in Hanover; others date it to after the rupture between George and his father, King George I. Given that Henrietta had to share rooms with her husband at St. James Palace, the more likely date is around 1718 or 1719 after she moved to Leicester House.

Princess Caroline was totally down with him having a mistress, if only because it gave her a break from having to listen to her husband. However, she was particular about who the mistress was. Her chief concern was that his mistress might somehow have more influence with him than she did. Henrietta’s chief assets were that she was a good listener, and that she was non-threatening. Unlike George I’s mistresses, she wasn’t greedy. For Henrietta, it was all about security and protection, chiefly from her husband Charles, who still continued to be horrible. So this affair was no love match, not even very much lust apparently. George tended to prefer buxom blondes like his wife, while Henrietta was a slender brunette. Although she died her hair lighter, since boob jobs hadn’t been invented yet, there was not much she could do upfront. She was also pushing thirty which was pretty long in the tooth to start a career as a royal mistress. Still every night for almost 15 years, George dutifully visited her apartments at the appointed time for several hours. More likely they spent at least part of that time playing cards before repairing to the bedchamber.