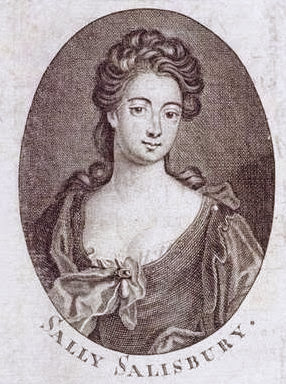 Heather Carroll remembers Sally Salisbury, one of the most famous courtesans of the early 18th century. To quote:

As a successful prostitute the viviacious and fiery Sally lived a typical hedonistic 18th century life. This landed her into prison a few times for short stays, usually for debt and minor crimes. One time she even got out of a prison stay because the judge had a huge crush on her.

But Sally got a little carried away one night in 1723. John Finch, second son of the Duchess of Winchelsea, had bought some tickets to the opera and had given them to Sally’s sister and not to Sally. Well, it must have been a very good opera because Sally was pissed off that John had neglected her. An argument broke out between the two at Three Tuns Tavern and Sally, blinded by her anger, stabbed John in the heart! Ever the gentleman, John responded, “Madam, you have wounded me.” Apparently, Sally wasn’t aware of this and immediately began apologizing for trying to kill John. He was fine, by the way. John forgave her but the law didn’t. She was sentenced to a year in prison and had to pay £100 fine.