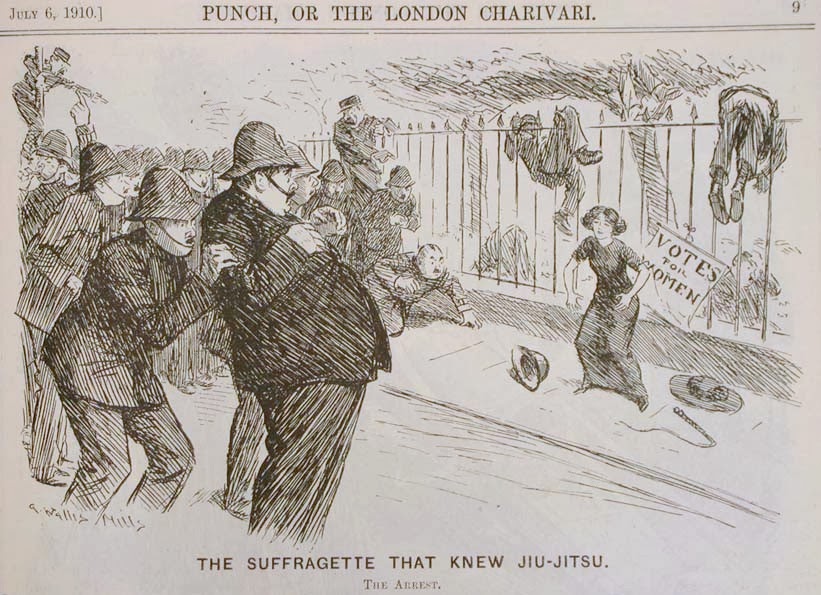 More generally, the tactic of adopting all-white ensembles in mass public rallies was hugely dramatic and it gave women a tremendous sense of solidarity. The militant Women’s Social Political Union went one step further and promoted specific WSPU colours. White was for purity, purple represented loyalty to the King, and green was for hope.

Militant suffragettes used clothes creatively to disguise themselves. Emily Wilding Davison made a fetching telegram ‘boy’ attempting to gain access to Parliament. Lady Constance Lytton took on the disguise of a working-class seamstress in order to highlight the prejudiced treatment of lower-class women in prison. On one glorious occasion, several WSPU suffragettes disguised themselves as their leader, Emmeline Pankhurst, in order to foil an attempt to arrest her.

Once women behaved in unladylike ways, chivalry from men was forgotten. The gloves came off on both sides. There were many reports of violence against suffragettes, from the minor outrage of torn clothes–or clothes stained with rotten eggs–to serious cases of sexual assault during suffrage rallies. Edith Garrud was employed to lead a team of bodyguards to protect WSPU speakers.