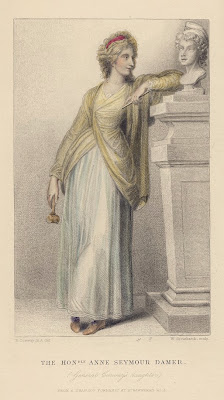 Mrs Anne Damer was a famous English sculptor. To quote:

Anne was now a widow. A widow in a lot of debt. This put Mrs. Damer in an awful situation. But believe it or not, it was probably the best thing that could happen to her. Walpole not only took her in at his home in Strawberry Hill but he helped to get her on her feet again and allowed freedoms that her marriage lacked. The old bachelor loved her as his own and even willed his Strawberry Hill home to her. Anne took up her childhood hobby of sculpture and honed her skills until she was a reputable artist. Her work reflects the Neoclassicism of the period which helped to gain her many allegorical commissions such as the heads of Isis and Tamesis which still grace the keystones of Henley Bridge today. Her friendships that developed between Sarah Siddons and Elizabeth Farren also earned her some theatrical commissions including reliefs for Boydell Shakespeare Gallery. By 1784 Anne was an honorary exhibitor at the Royal Academy and remained so until 1818.