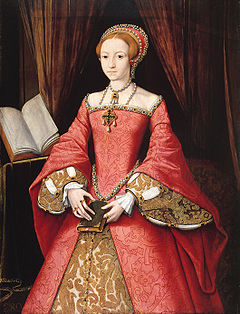 Author Claire Ridgeway has written a very interesting post about the people who made up Elizabeth Tudor’s household. To quote:

Sir John Shelton was married to Anne Boleyn, sister of Thomas Boleyn and aunt to Queen Anne Boleyn. The couple were in charge of the households of Mary and Elizabeth from 1533 and were the parents of Margaret and Mary Shelton, maids-of-honour to Anne Boleyn. Sir John was the steward of Mary and Elizabeth’s combined household and was, therefore, in charge of expenditure and keeping the accounts. Lady Anne Shelton was one of the ladies appointed to serve Anne Boleyn during her imprisonment in the Tower in 1536.
In “From Heads of Household to Heads of State”, J. L. McIntosh, writes of how, during the crisis in Elizabeth’s household after Anne Boleyn’s execution when money from Cromwell was not forthcoming, Shelton “most likely authorized a Ralph Shelton (presumably a relative) to set up a poaching scheme involving several of the
steward’s servants in the parklands surrounding Hatfield. No wonder Elizabeth’s high table had such “dyvers metes.”
In 1537, John Shelton was replaced as steward by William Cholmely, and in 1539 Shelton died. However, his family remained important to Elizabeth throughout her life. She visited them on numerous occasions and Shelton’s granddaughter, Lady Mary Scudamore, was a member of Elizabeth’s Privy Chamber when she was queen.

Katherine Champernon (or Champernowne) was appointed to Elizabeth’s household in July 1536 and became her governess in 1537. Elizabeth knew her as “Kat” and later said that she took “”great labour and pain in bringing of me up in learning and honesty”. Kat, who married Sir John Ashley in 1545, was a close confidante to Elizabeth and was appointed First Lady of the Bedchamber when Elizabeth became queen.
Kat was highly educated and seems to have been in charge of the princess’ education between 1536 and 1544.
Trivia: Kat’s loyalty to Elizabeth was tested when she was arrested and imprisoned in 1549 on charges of being involved in Thomas Seymour’s plan to marry Elizabeth. She refused to implicate her mistress and was released after a few weeks.

Elizabeth was educated by Kat Ashley (who had advice from Roger Ascham) until 1544 when the Humanist and Protestant, William Grindal, became Elizabeth’s tutor. Grindal was part of a circle of men who were all part of the influential Humanist movement at Cambridge University. This group included the likes of Matthew Parker (Anne Boleyn’s chaplin), John Cheke (Edward VI’s tutor), Anthony Cooke, Roger Ascham (Elizabeth’s future tutor), John Dee and William Cecil – all men who played a part in Elizabeth’s life.
William Grindal died in 1549 and his position as Elizabeth’s tutor passed to Roger Ascham who continued what Grindal had begun, i.e. ensuring that Elizabeth’s education was a Protestant one and was of the “new learning”.