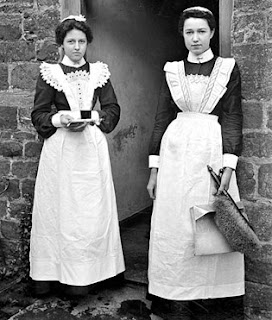 Author Evangeline Holland gives us an insight into the life of a working-class girl during the interwar years. To quote:

I left the factory for a short break and went into service when I was fifteen. Mother would have preferred me to be placed in ‘good service’ as she had been in her time, but I went as a ‘maid of all work’. I was expected to wait at table, getting my own meals when I could, there being no alloted times for the servant. I took the food into the dining -room and was given a plate with mine served ready to eat, which I would take back into the kitchen and eat standing up by the draining board, or at least attempt to, because by the time I had taken the vegetables round to the other diners at the table and returned mine was invariably cold. There was no point in my sitting down because in about ten or twelve minutes the bell would ring for the sweet to be brought in. Before I could start on my sweet, the bell would ring again for me to clear the table.

These conditions were the norm for a general servant or ‘generals’ as we were called. Many of my school friends became ‘skivvies’ by the fact of being females and there being very little other work for them, other than in one of the factories. It used to amuse me when factory girls looked down on us as inferior, calling us ‘drain ‘ole cleaners’. Some maids, after a long period in service, acquired the accents of their employers and, in their turn, looked down on factory girls and thought them ‘common’.

A ‘general’ was expected to do all the housework, preparing the vegetables and the cooking. I had to be up at six-thirty in the morning and clean the master’s shoes and get the children’s clothes ready for school. I was small for fifteen and their own daughter, who was thirteen, had reached pubescence and I had not; I was treated as a child in any way, or even as a young person.

When my master or mistress went out at night, I was expected to stay up in case one of the young children woke and called. I was left plenty of ironing to do and silver to clean just in case I got sleepy; then up again next morning early.