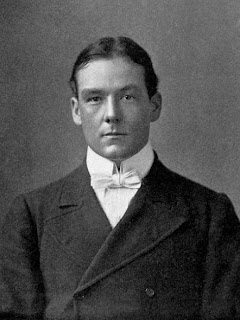 Over at Edwardian Promenade, author Evangeline Hollande has posted Richard Harding Davis’ account of what the life of a student at Oxford was like. to quote:

The day of an Oxford man is somewhat different from that of an American student. He rises at eight, and goes to chapel, and from chapel to breakfast in his own room, where he gets a most substantial breakfast—I never saw such substantial breakfasts anywhere else — or, what is more likely, he breakfasts with some one else in some one else’s rooms. This is a most excellent and hospitable habit, and prevails generally. So far as I could see, no one ever lunched or dined or breakfasted alone. He either was engaged somewhere else or was giving a party of his own. And it frequently happened that after we were all seated our host would remember that he should be lunching with another man, and we would all march over to the other man’s rooms and be received as a matter of course. It was as if they dreaded being left alone with their thoughts. It struck me as a university for the cultivation of hospitality before anything else.

After breakfast the undergraduate “reads” a bit, and then lunches with another man, and reads a little more, and then goes out on the river or to the cricket-field until dinner. The weather permits this out-of-door life all the year round, which is a blessing the Oxford man enjoys and which his snow-bound American cousin does not. His dinner is at seven, and if in hall it is a very picturesque meal. The big hall is rich with stained glass and full-length portraits of celebrated men whose names the students never by any possible chance know, and there are wooden carved wainscotings and heavy rafters. There is a platform at one end on which sit the dons, and below at deal tables are the undergraduates in their gowns—worn decorously on both shoulders now, and not swinging from only one—and at one corner by themselves the men who are training for the races. The twilight is so late that the place needs only candles, and there is a great rattle of silver mugs that bear the college arms, and clatter of tongues, and you have your choice of the college ale or the toast and water of which you used to read and at which you probably wondered in Tom Brown at Oxford. The dons are the first to leave, and file out in a solemn procession. If you dine with the dons and sit above your fellow-men you are given the same excellent and solid dinner and wine in place of beer, and your friends of the morning make faces at you for deserting them and because of your higher estate.