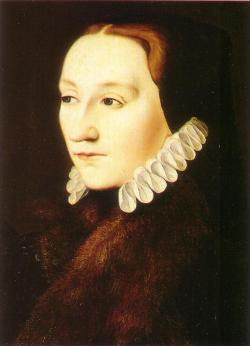 Over at The Anne Boleyn Files, author Susan Higginbotham sets the record straight on Frances Grey, Jane Grey’s mother. Was she really the wicked woman she’s made up to be nowadays?

It is with Jane’s birth that writers of popular nonfiction begin to wreak havoc with Frances’s reputation. Hester Chapman writes that the “Dorsets were disappointed at not having a son” when Jane was born, and goes on to state that Frances Grey “could not forgive” her daughters for their sex. Alison Weir writes that Henry Grey “regarded [Jane] as a poor substitute for the son who had died young before her birth.” In her truly execrable biography of Jane Grey, Mary Luke devotes two entire paragraphs to Frances’s longing to bear her husband a male child, ending with her “sobbing heartbreakingly” when she discovers she has borne a girl. Mary Lovell in her biography Bess of Hardwick writes that after the death of the Greys’ son, Frances gave birth to her daughters, “to whom their parents made it abundantly clear that they were a major disappointment.” None of these writers cite a source for their claim, for the very good reason that there is none. Frances and her husband might well have hoped for a son—parents of their class generally did—but there’s simply no evidence that they did not greet the birth of a daughter with happiness, particularly when the infant thrived instead of following her siblings to the grave. As Eric Ives points out, Henry and Frances Grey were not in the public eye when their most famous daughter was born, and neither her date of birth nor her place of birth has been recorded, much less her parents’ reactions to her arrival in the world.

Henry VIII died in 1547. Shortly afterward, the Greys performed the first act for which history has damned them—agreeing to Thomas Seymour’s request that they put Jane Grey in his wardship, in the hopes that Thomas would broker a match between Jane and the young king, Edward VI. This has been taken as proof of the Greys’ insatiable ambition, but what noble parent, given the opportunity to match their daughter with a king, would have passed up the chance? Like any other girl of her class, Jane would have been brought up with the expectation that she would marry for the good of her family. This was a two-way street: Jane would have also expected that her parents do their best for her future by marrying her to a high-status groom. Whether Jane was aware of these plans for her is unknown, but there is no reason to assume that the possibility of marriage to the king, her first cousin, would have displeased her.

It was in August 1550 that Frances made the biggest mistake of her life, at least in terms of her historical reputation. She went hunting with the rest of the household, and left her daughter Jane behind to greet a visitor, Roger Ascham. It was then that Jane made her famous complaint about her parents, recalled by Ascham years later, after Jane and her parents were all dead:

“For when I am in presence either of father or mother; whether I speak, keep silence, sit, stand, or go, eat, drink, be merry, or sad, be sewing, playing, dancing, or doing any thing else; I must do it, as it were, in such weight, measure, and number, even so perfectly, as God made the world; or else I am so sharply taunted, so cruelly threatened, yea presently sometimes with pinches, nips, and bobs, and other ways (which I will not name for the honour I bear them) so without measure misordered, that I think myself in hell, till time come that I must go to Mr Elmer; who teacheth me so gently, so pleasantly, with such fair allurements to learning, that I think all the time nothing whiles I am with him. And when I am called from him, I fall on weeping, because whatsoever I do else but learning, is full of grief, trouble, fear, and whole misliking unto me. And thus my book hath been so much my pleasure, and bringeth daily to me more pleasure and more, that in respect of it, all other pleasures, in very deed, be but trifles and troubles unto me.”

The impact of Ascham’s recollection on Frances’s reputation simply cannot be understated. Historians and novelists alike have used it to construct an image of Jane’s entire childhood as more Dickensian than anything that Dickens himself could have imagined, brightened only by Jane’s brief stay at Katherine Parr’s household. Any possibility that the adolescent Jane, like other intelligent adolescents, might have been exaggerating her complaints, that she might have spoken less harshly of her parents with time and maturity, or that her parents might have had genuine cause (by Tudor standards) for disciplining her has been ignored by all but a handful of writers.