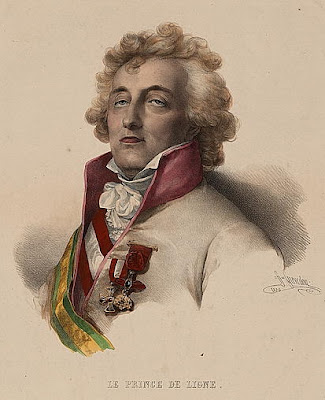 Novelist Elena Maria Vidal has written a wonderful post about the Prince De Ligne, a Belgian nobleman and a good friend of Marie Antoinette. Here’s how he described the unfortunate Queen in his Memoirs:

As for the queen, the radiance of her presence harmed her. The jealousy of the women whom she crushed by the beauty of her complexion and the carriage of her head, ever seeking to harm her as a woman, harmed her also as a queen. Fredegonde and Brunehaut, Catherine and Marie de’ Medici, Anne and Theresa of Austria never laughed; Marie Antoinette when she was fifteen laughed much; therefore she was declared “satirical.”

She defended herself against the intrigues of two parties, each of whom wanted to give her a lover; on which they declared her “inimical to Frenchmen;” and all the more because she was friendly with foreigners, from whom she had neither traps nor importunity to fear.

An unfortunate dispute about a visit between her brother the Elector of Cologne and the princes of the blood, of which she was wholly ignorant, offended the etiquette of the Court, which then called her “proud.”

She dines with one friend, and sometimes goes to see another friend, after supper, and they say she is “familiar.” That is not what the few persons who lived in her familiarity would say. Her delicate, sure sense of the becoming awed them as much as her majesty. It was as impossible to forget it as it was to forget one’s self.

She is sensible of the friendship of certain persons who are the most devoted to her; then she is declared to be “amorous” of them. Sometimes she requires too much for their families; then she is “unreasonable.”

She gives little fetes, and works herself at her Trianon: that is called “bourgeoise.” She buys Saint-Cloud for the health of her children and to take them from the malaria of Versailles: they pronounce her “extravagant.” Her promenades in the evening on the terrace, or on horseback in the Bois de Boulogne, or sometimes on foot round the music in the Orangery “seem suspicious.” Her most innocent pleasures are thought criminal; her general loving-kindness is ” coquettish.” She fears to win at cards, at which she is compelled to play, and they say she ” wastes the money of the State.”

She laughed and sang and danced until she was twentyfive years old: they declared her *’ frivolous.” The affairs of the kingdom became embroiled, the spirit of party arose and divided society; she would take no side, and they called her “ungrateful.”

She no longer amused herself; she foresaw misfortunes: they declared her “intriguing.” She dropped certain little requests or recommendations she had made to the king or the ministers as soon as she feared they were troublesome, and then she was “fickle.”