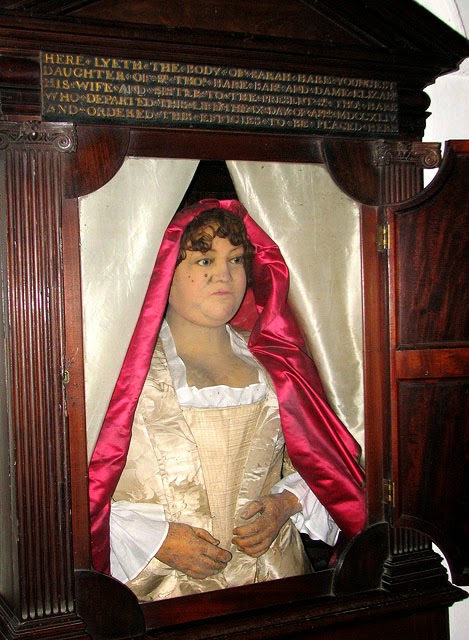 Jane Austen’s World remembers Sarah Hare, a 18th century spinster who made a particular request in her will. To quote:

Sarah made no extraordinary contributions to this world except one – a wax effigy of herself, the only such mortuary statue of its kind in England outside of Westminster Abbey. (Most mortuary statues at the time were made of marble.) She was the youngest daughter of Sir Thomas Hare of Stow Hall in Stow Bardolph, Norfolk, where the family lived in a Jacobean style red-brick mansion. The Hare family had lived in a house on that site since 1589 and played a significant role in the village of Stow Bardolph. In 1622, Sir Ralph Hare built six almshouses and provided them with 86 acres of land for division among the inmates.

Today we know very little about Sarah Hare’s life except that she never married and was not very pretty. Sarah must also have had a premonition of her death, for she requested the following in a will dated August 1743:

“I desire Six of the poor men in the parish of Stow or Wimbotsham may put me in to the ground they having five shillings a piece for the same. I desire all the poor in the Alms Row may have two shillings and sixpence each person at the Grave before I am put in. This I hope my Executor will see firstly performed before Sunset…..I desire to have my face and hands made in wax with a piece of crimson satin thrown like a garment in a picture hair upon my head and put in a case of Mahogany with a glass before and fix’d up so near the place were my corps lyes as it can be with my name and time of Death put upon the case in any manner most desirable if I do not execute this in my life I desire it may be done after my Death.”