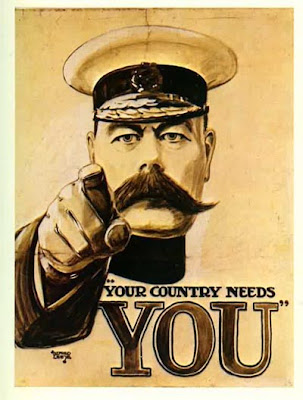 The Telegraph shares the findings of a new study about the impact the First World War had on the English language and the words it introduced into it. To quote:

The brutality of life at the front also gave rise to many euphemisms, to describe death and fear. Comrades who were killed were said to be “pushing up daisies”, or to have “gone west” “snuffed it”, “been skittled” or “become a landowner”. Those who were afraid were said to have “got the wind up”.

Many terms which were particular to one region or social class before the war, entered common usage afterwards. Examples include “scrounging” – to describe foraging for food, such as wild rabbits – which is thought to have derived from a northern dialect, and “binge” – to describe overindulgence in alcohol – previously just used in Lancashire. “Blotto” was another term for drunk popularised during the war.

Lower class words like “gasper” or “fag” and “bloke” – which previously referred just to a gentleman – moved from their narrow social roots.

Several phrases from the criminal underworld also entered wider use, among them “chum” – formerly slang for an accomplice – “rumbled” (to be found out) and “knocked off” (stolen).

Many more new terms came from the mix of nationalities thrown together by the war. The French term souvenir replaced keepsake as the primary word for a memento, following exchanges with the locals, while officers being sacked were said to have “come ungummed” – from the French “dégommér”, to dismiss. This quickly developed into “come unstuck”.