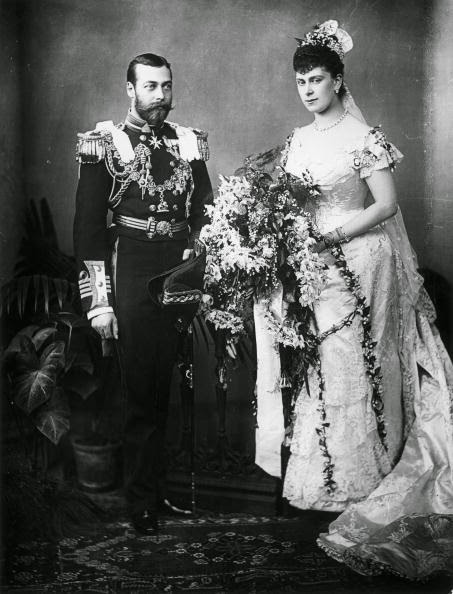 Madame Guillotine remembers the wedding of King George V and Mary of Teck. To quote:

Like the earlier royal bride, Catherine of Aragon, May was first engaged to the older brother of her eventual husband. And like Diana Spencer nearly a century later, May was recommended for the role of royal bride by a member of the royal family. In this case, it was her mother’s cousin, the Queen. Victoria believed May would make a suitable wife for her grandson and eventual heir to the throne, Albert Victor (Eddy), the Duke of Clarence and Avondale. Although she barely knew him and he was not very attractive, the impecunious May could not refuse when Eddy proposed in 1891. Tragically, he succumbed to a flu epidemic a few weeks later, and, within days, died of pneumonia. Instead of carrying it down the aisle, May laid her “redundant bridal bouquet of orange blossom on Eddy’s coffin.”

Victoria, who was devastated by the loss of Eddy and by the tragic end to her wedding plans, encouraged Eddy’s younger brother, George, then Duke of York, to comfort the bereaved May. Just five months after his brother’s death, George proposed. Again, May agreed – despite not knowing George very well at all. On the 6th July 1893 the 28 year old George and his 26 year old bride married in the small Chapel Royal in St James’s Palace, where the Queen herself had married Albert in 1840.