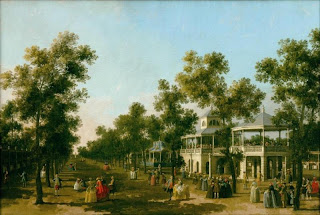 Mike Rendell, over at the English Historical Fiction Author Blog, reveals what are the top 10 attractions tourists in London in the eighteenth century would have visited. To quote:

Pictures at Spring Gardens (otherwise known as Vauxhall Gardens)
For his one shilling admission in 1780 Richard would have been able to see all London life. The gardens were frequented by anyone who was anyone (the Prince of Wales and his aristocratic buddies were regular visitors) as well as by the lowest of the low. Promenading gave the opportunity to see and be seen, and as darkness fell the place was illuminated with oil lamps, music would be played and guests would take their seats in the fifty or so supper boxes. Each was adorned with a different painting and in the daytime these were available for the general public to view.

Cox’s Museum
James Cox was a jeweller who made fabulous bejewelled automata (i.e. with clock-work moving parts). At one stage he claimed to have a thousand silversmiths and jewellery workers in his employ, turning out objects for places such as the Imperial courts in Russia and China. He opened a museum at Charring Cross to display some of his wares. Entrance was not cheap (Richard would have paid ten shillings and sixpence per head to go in – and then forked out the same again for the official catalogue). But what a spectacle! He would have been greeted by a gold dais, surmounted by giant paintings of King George II and his Queen, painted by the court painter Zoffany. From there he would have been led through to a succession of salons, each exhibiting things such as full sized tigers and elephants made of silver and gold, studded with precious stones. He may have seen the gorgeous life-sized silver swan, with its articulated neck which enabled it to bend forward and appear to pull a silver fish from the water (still in working order today, and nowadays to be seen at the Bowes Museum at Barnard Castle). Time and time again Richard went back to see the display, taking a succession of guests with him throughout the 1770s.

Mrs Wright’s waxworks
Before Madame Tussaud came to London (and got trapped here because of the war with France!) there had been a succession of wax-works. The one Richard favoured was in Pall Mall and was run by an American woman called Mrs Wright. She created a sensation with her models of the Great and the Good, and reportedly enjoyed playing tricks on people by arranging her models in life-like poses on a settee, and watching as the visitors tried to strike up a conversation! Mrs Wright later sought a pension from the US Government, claiming that she had in fact been acting as a spy while in England, sounding out politicians about their plans during the War of Independence, and smuggling notes back to America, rolled up inside the wax effigies which she had made.