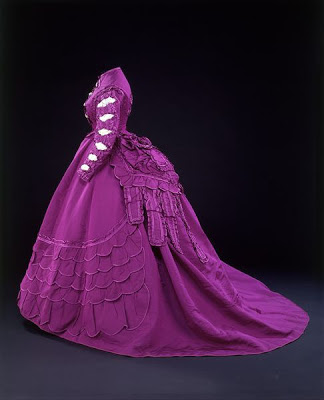 Over at her blog, Madame Guillotine, author Melanie Clegg has started a new series about historical dresses. In the first installment, she talks about mauve gowns and explains how this bright colour was created. To quote:

This gown was made in around 1870 by Madame Vignon, one of the most fashionable couturiers in Paris, who was a great favourite of the ultra stylish Empress Eugénie. The vivid hue is the result of the amazing new synthetic aniline dyes that came into use in the late 1850s thanks to the experimentation of Sir William Henry Perkin who accidentally discovered the first synthetic dye in 1856 while an eighteen year old Chemistry student in London. He was actually trying to develop a synthetic alternative to the anti malaria drug quinine but swiftly ditched this when he realised that his experiment had produced a vivid purple shade.

The first dye, as discovered by Perkin was a particularly lurid hue of violet, which he immediately and with enormous foresight for a science geek sort, patented as ‘aniline purple’ although it would become better known as ‘mauveine’ or simply ‘mauve’. He also set up a dye works in London to produce huge quantities of his amazing mauve dye. It must have seemed completely mad to him that he had managed to invent a whole new colour while trying (and failing!) to create a medical treatment. Isn’t science ace?