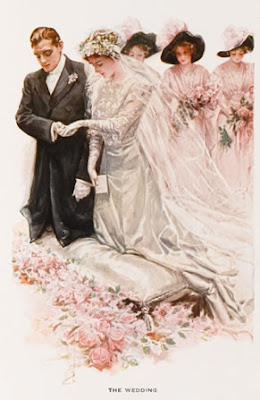 Evangeline, author of the Edwardian Promenade website, has written an interesting article on weddings in the Edwardian era. To quote:

The most important parts of the wedding were the bride’s gown and trousseau. The traditional attire for a bride was a gown of soft, rich cream-white satin, trimmed simply or elaborately with lace, a wreath of orange-blossoms, and a veil of lace or tulle. The skirt had a train, and except at an evening wedding, waists cut open, or low at the neck, or with short or elbow sleeves (unless the arms were covered with long gloves) were not approved for brides. A wedding gown was supposed to be sumptuous and of the most costly materials, for the bride was privileged to wear her wedding down for six months after her marriage at functions requiring full dress. The train averaged eighty inches in length, though very tall brides wore ninety-five inch trains.

The actual service was an equally lavish affair: the bride was driven to the church with her father, where relatives and guests awaited. Once the bride alighted from the carriage, the bridesmaids and ushers preceded her, two by two, as her father escorted her down the aisle. As the bridesmaids and ushers reached the lowest altar step, they moved alternately left and right, leaving space for the bridal pair. When the bride reached the lowest step, the groom took her by her right hand and conducted her to the altar where they both kneeled on an elaborate kneeling cushion. Formerly, brides removed the whole glove for the groom to place the ring on her finger, but by the turn of the century, gloves were made with a removable left ring-finger, to facilitate easy access. After the ceremony, the bride and groom marched down the aisle to a choir and strewn rose petals and were immediately driven home.