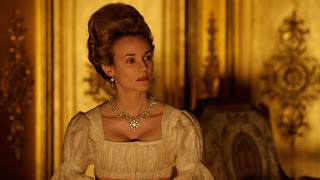 Author Gareth Russell tries to explains why movies about Marie Antoinette always turn out to be disappointing. To quote:

Marie-Antoinette’s story is fascinating, but that does not necessarily mean that she was. She was charming, flawlessly well-mannered, graceful, elegant and (as the final few years of her life would show) very, very brave. But, she was no Anne Boleyn or Cleopatra. She had no real intellectual interests and, for most of her life, no political agenda. She was kind to people and (contrary to how she’s presented today) particularly so to the poor. But it was the Revolution which made Marie-Antoinette famous for centuries after her death, not her own personality. And I think that’s why writers get her so wrong, so often. We can’t accept that this theoretically amazing character actually had whole stages of her life which were, alas, quite boring. For the first few years of her married life, she was ignored by her husband’s family; for the next few, she escaped that humiliation in a round of big hair, big dresses and even bigger parties, and then there was nearly a decade in which her chief concern was to be a good mother and a good Catholic. Worthy stuff, but hardly fascinating from the point of view of an actress, novelist or playwright.