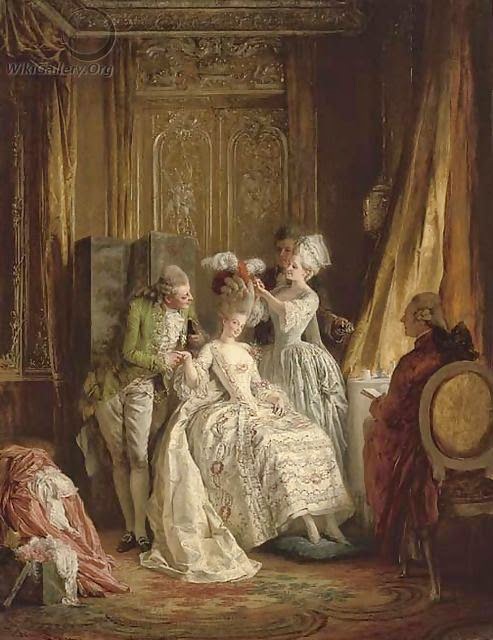 When a princess of the royal family happened to be present while the Queen was dressing, the dame d’honneur yielded to her the latter act of office, but still did not yield it directly to the Princesses of the blood; in such a case the dame d’honneur was accustomed to present the linen to the first femme de chambre, who, in her turn, handed it to the Princess of the blood. Each of these ladies observed these rules scrupulously as affecting her rights.

One winter’s day it happened that the Queen, who was entirely undressed, was just going to put on her shift; I held it ready unfolded for her; the dame d’honneur came in, slipped off her gloves, and took it. A scratching was heard at the door; it was opened, and in came the Duchesse d’Orleans: her gloves were taken off, and she came forward to take the garment; but as it would have been wrong in the dame d’honneur to hand it to her she gave it to me, and I handed it to the Princess.

More scratching it was Madame la Comtesse de Provence; the Duchesse d’Orleans handed her the linen. All this while the Queen kept her arms crossed upon her bosom, and appeared to feel cold; Madame observed her uncomfortable situation, and, merely laying down her handkerchief without taking off her gloves, she put on the linen, and in doing so knocked the Queen’s cap off. The Queen laughed to conceal her impatience, but not until she had muttered several times, “How disagreeable! how tiresome!”[…]

The ladies-in-waiting, who were all obliged to be sworn, and to wear full Court dresses, were alone entitled to remain in the room, and to attend in conjunction with the dame d’honneur and the tirewoman. The Queen abolished all this formality. When her head was dressed, she curtsied to all the ladies who were in her chamber, and, followed only by her own women, went into her closet, where Mademoiselle Bertin, who could not be admitted into the chamber, used to await her. It was in this inner closet that she produced her new and numerous dresses.

The Queen was also desirous of being served by the most fashionable hairdresser in Paris. Now the custom which forbade all persons in inferior offices, employed by royalty, to exert their talents for the public, was no doubt intended to cut off all communication between the privacy of princes and society at large; the latter being always extremely curious respecting the most trifling particulars relative to the private life of the former. The Queen, fearing that the taste of the hairdresser would suffer if he should discontinue the general practice of his art, ordered him to attend as usual certain ladies of the Court and of Paris; and this multiplied the opportunities of learning details respecting the household, and very often of misrepresenting them. 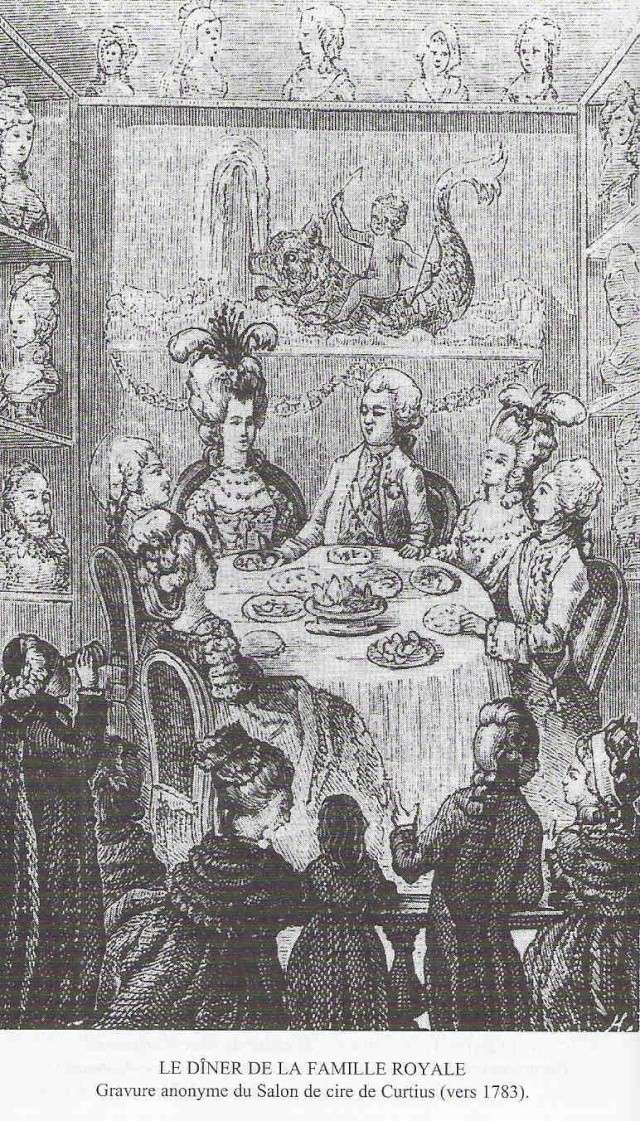 One of the customs most disagreeable to the Queen was that of dining every day in public. Maria Leczinska had always submitted to this wearisome practice; Marie Antoinette followed it as long as she was Dauphiness. The Dauphin dined with her, and each branch of the family had its public dinner daily. The ushers suffered all decently dressed people to enter; the sight was the delight of persons from the country. At the dinner-hour there were none to be met upon the stairs but honest folks, who, after having seen the Dauphiness take her soup, went to see the Princes eat their ‘bouilli’, and then ran themselves out of breath to behold Mesdames at their dessert.

Very ancient usage, too, required that the Queens of France should appear in public surrounded only by women; even at meal-times no persons of the other sex attended to serve at table; and although the King ate publicly with the Queen, yet he himself was served by women with everything which was presented to him directly at table. The dame d’honneur, kneeling, for her own accommodation, upon a low stool, with a napkin upon her arm, and four women in full dress, presented the plates to the King and Queen.

The dame d’honneur handed them drink. This service had formerly been the right of the maids of honour. The Queen, upon her accession to the throne, abolished the usage altogether. She also freed herself from the necessity of being followed in the Palace of Versailles by two of her women in Court dresses, during those hours of the day when the ladies-in-waiting were not with her. From that time she was accompanied only by a single valet de chambre and two footmen. All the changes made by Marie Antoinette were of the same description; a disposition gradually to substitute the simple customs of Vienna for those of Versailles was more injurious to her than she could possibly have imagined.

When the King slept in the Queen’s apartment he always rose before her; the exact hour was communicated to the head femme de chambre, who entered, preceded by a servant of the bedchamber bearing a taper; she crossed the room and unbolted the door which separated the Queen’s apartment from that of the King. She there found the first valet de chambre for the quarter, and a servant of the chamber. They entered, opened the bed curtains on the King’s side, and presented him slippers generally, as well as the dressing-gown, which he put on, of gold or silver stuff. The first valet de chambre took down a short sword which was always laid within the railing on the King’s side.

When the King slept with the Queen, this sword was brought upon the armchair appropriated to the King, and which was placed near the Queen’s bed, within the gilt railing which surrounded the bed. The first femme de chambre conducted the King to the door, bolted it again, and, leaving the Queen’s chamber, did not return until the hour appointed by her Majesty the evening before. At night the Queen went to bed before the King; the first femme de chambre remained seated at the foot of her bed until the arrival of his Majesty, in order, as in the morning, to see the King’s attendants out and bolt the door after them. The Queen awoke habitually at eight o’clock, and breakfasted at nine, frequently in bed, and sometimes after she had risen, at a table placed opposite her couch.

In order to describe the Queen’s private service intelligibly, it must be recollected that service of every kind was honour, and had not any other denomination. To do the honours of the service was to present the service to a person of superior rank, who happened to arrive at the moment it was about to be performed. Thus, supposing the Queen asked for a glass of water, the servant of the chamber handed to the first woman a silver gilt waiter, upon which were placed a covered goblet and a small decanter; but should the lady of honour come in, the first woman was obliged to present the waiter to her, and if Madame or the Comtesse d’Artois came in at the moment, the waiter went again from the lady of honour into the hands of the Princess before it reached the Queen.

It must be observed, however, that if a princess of the blood instead of a princess of the family entered, the service went directly from the first woman to the princess of the blood, the lady of honour being excused from transferring to any but princesses of the royal family. Nothing was presented directly to the Queen; her handkerchief or her gloves were placed upon a long salver of gold or silver gilt, which was placed as a piece of furniture of ceremony upon a side-table, and was called a gantiere. The first woman presented to her in this manner all that she asked for, unless the tirewoman, the lady of honour, or a princess were present, and then the gradation pointed out in the instance of the glass of water was always observed.

Whether the Queen breakfasted in bed or up, those entitled to the petites entrees were equally admitted; this privilege belonged of right to her chief physician, chief surgeon, physician in ordinary, reader, closet secretary, the King’s four first valets de chambre and their reversioners, and the King’s chief physicians and surgeons. There were frequently from ten to twelve persons at this first entree. The lady of honour or the superintendent, if present, placed the breakfast equipage upon the bed; the Princesse de Lamballe frequently performed that office.