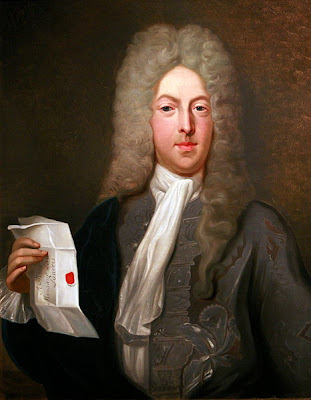 John Law was a Scottish economist who became the financial adviser to the regent of France in the early 18th century and was appointed Controller General of Finances of France under King Louis XV. When he was at the height of his power, people would come up with all sorts of crazy schemes to meet him. Here are two examples:

One Madame de Bouchu had strained every nerve to be admitted to a dinner at Madame de Simiani’s, where Mr. Law was to be present; but all her endeavours were ineffectual, it being known he did not choose to see her. She then bethought herself of ordering her coach to be driven before the house at dinner time, and directed the coachmen and lacqueys to give the alarm of fire, which made all the guests rise from table and run into the street. On Mr. Law’s appearance, she jumped out of her carriage to accost him, but he took to his heels the moment he beheld her face.

Another lady, more adventurous, gave orders to her coachman to overturn her carriage whenever he came near Mr. Law. She, however, was the first that perceived him, whereupon she roared out, “Overturn the carriage now, you rascal, overturn the carriage.” The man did so accordingly; and Mr. Law courteously coming to her assistance, the lady confessed that she had given such orders, in hopes thereby to have a chance of procuring the honour of speaking to him, an honour to which she could not otherwise have presumed to aspire.

Further reading:
Memoirs of the life of John Law of Lauriston