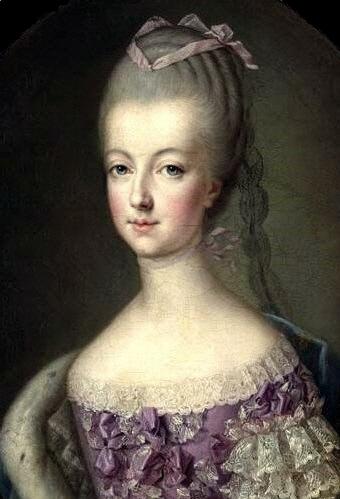 In her memoirs, Madame Campan remembers many of Marie Antoinette’s good and charitable deeds. Here’s an example of her benevolence:

In the month of July, 1770, an unfortunate occurrence that took place in a family which the Dauphiness honoured with her favour contributed again to show not only her sensibility but also the benevolence of her disposition. One of her women in waiting had a son who was an officer in the gens d’armes of the guard; this young man thought himself affronted by a clerk in the War Department, and imprudently sent him a challenge; he killed his adversary in the forest of Compiegne. The family of the young man who was killed, being in possession of the challenge, demanded justice. The King, distressed on account of several duels which had recently taken place, had unfortunately declared that he would show no mercy on the first event of that kind which could be proved; the culprit was therefore arrested.

His mother, in the deepest grief, hastened to throw herself at the feet of the Dauphiness, the Dauphin, and the young Princesses. After an hour’s supplication they obtained from the King the favour so much desired. On the next day a lady of rank, while congratulating the Dauphiness, had the malice to add that the mother had neglected no means of success on the occasion, having solicited not only the royal family, but even Madame du Barry. The Dauphiness replied that the fact justified the favourable opinion she had formed of the worthy woman; that the heart of a mother should hesitate at nothing for the salvation of her son; and that in her place, if she had thought it would be serviceable, she would have thrown herself at the feet of Zamor*.