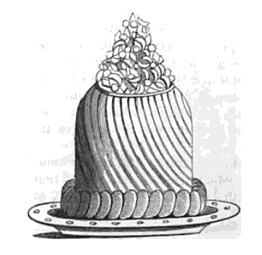 An ice cream is a delicious way to cool you off when you’re feeling hot. Like in the summer, when the temperatures are scorching. Or after hours of dancing at a ball or party. Ice creams (or ice puddings, as they were then called) were commonly served at such occasions during the Victorian era. Ice creams could be simple or elaborated, like the ones created by Charles Francatelli, Queen Victoria’s chef. Here are a few recipes named after members of the royal family:

First, prepare eight yolks of eggs of custard, as for the Stanley cake*; previously to passing this through a tammy, add two pottles of picked scarlet strawberries, tossed in a sugarboiler with ten ounces of pounded sugar over a brisk fire, until they begin to simmer; When the whole has been passed into a puree, allow it to cool; then freeze it in the usual manner, and fill a cylindrical pudding-mould with it, stop it down with the lid, and immerse it in rough ice.

While the foregoing part of the process is in preparation, an iced macedoine of fruits must be made as follows :—First, extract the juice from one pound of muscatel grapes, and add a sufficient quantity of syrup, to give body to it; this must then be put into the freezing-pot, and worked in the usual way. Just before using the ice, a proportionate quantity of light-coloured fruit must be added, and mixed in lightly with the ice, so as not to bruise them: these fruits should consist of small pieces of pine-apple, peach, apricot, white raspberries, strawberries, and bigaroon-cherries; this macedoine should be finished just before dishing up. The pudding must be turned out of the mould on to its dish, the centre filled with the macedoine, as represented in the annexed wood-cut, and immediately served.

Prepare some rice custard ice, as directed for the pudding a la Cintra**: about half that quantity will suffice. Slice up a dozen ripe apricots, and boil them with twelve ounces of sugar, and half a pint of water, until the fruit is dissolved; then pass it through a sieve—if it should be too thick, add a little thin syrup, and freeze this in the usual manner. The two ices being ready, a pudding-mould should be lined with a coating of the apricot-water ice, about half an inch thick, and the centre filled up entirely with the iced rice-custard; cover the pudding with the lid of the mould, and immerse it in rough ice until dishing-up time. The pudding must then be placed on its dish, garnished with some wafer-gauffres filled with whipped cream seasoned with noyau, and served immediately.

Remove the skins from one pound of Albert-kernels, and pound these with ten ounces of sugar, (adding a few drops of water,) until they become soft and pulpy; take up this paste into a basin, add a pint of single cream, stir the whole well together, and pass it through a tammy into a puree; then freeze this in the usual manner. While the above is being prepared, a pint of cherry-water-ice must be made as follows:—Remove the stalks from two pounds of Kentish cherries, and bruise them thoroughly in a mortar, so as to break the stones, then take them up into a sugar boiler, add twelve ounces of sugar, and boil the whole together over a brisk stove-fire for five minutes; rub this through a hair sieve into a basin, and freeze it, adding a little thin syrup if necessary. Use the cherry-water-ice to line the pudding-mould with, garnish the centre with the filbert-cream-ice, cover the mould with its lid, and immerse the pudding in rough ice until dishing up time. The pudding must then be turned out on its dish, garnished round with wafer gauffres filled with some of the filbert-cream reserved for the purpose, and served immediately.

First, remove the skins from the kernels of about fifty green walnuts, then pound these with ten ounces of sugar, until the whole forms a kind of soft and pulpy paste; take this up into a basin, mix it with a pint of single cream, then pass it through a tammy into a puree, and let this be frozen in the usual manner.

While the above is in course of preparation, two dozen green-gages must be boiled with twelve ounces of sugar and half a pint of water, until the fruit is dissolved, when the whole must be rubbed through a tammy or sieve : this should then be frozen, adding if necessary, a little thin syrup. The pudding-mould must now be lined with the green-gage ice, and the centre filled with the walnut-cream-ice; then place the lid on the mould, and immerse the pudding in rough ice in the usual manner, until dishing-up time, when the pudding must be turned out on to its dish, garnished round with small almond-gauffres filled with whipped cream, with a preserved cherry placed on the top of each, and served immediately.

Notes:
* Mix ten yolks of eggs with a pint and a half of boiling cream, eight ounces of sugar, and sufficient cinnamon and lemon-peel to flavour it; add a very little salt, and stir the whole in a stewpan over the fire until it begins to thicken ; the custard should then be immediately passed through a tammy or sieve, into a basin, and allowed to become cold. This custard must now be placed in a freezingpot used for making ices, and should be occasionally worked with a scraper as it becomes set by freezing.
** Wash and parboil eight ounces of Carolina rice; then, put it into a stewpan, with a quart of milk and a pint of cream, two sticks of vanilla, twelve ounces of sugar, and a little salt; allow the rice to simmer very gently over or by a slow stove-fire, until the grains are almost dissolved, stirring it over occasionally with a light hand. When the rice is done, and while it is yet in a boiling state, add the yolks of six eggs, then stir the whole well together for several minutes, in order to mix in the eggs, and also for the purpose of breaking up and smoothing the rice. Let this ricecustard be frozen in the same manner as directed in the foregoing case, and then put it into a plain mould; cover it with the lid, and immerse it in ice in the usual way.