Industry and Idleness was a common theme for many prints in the 18th century. The most famous example is Hogarth’s. His series features 12 plates, which were just engraved and never painted, each of which has a Biblical quotation relevant to the scene:

THE FELLOW-‘PRENTICES AT THEIR LOOMS 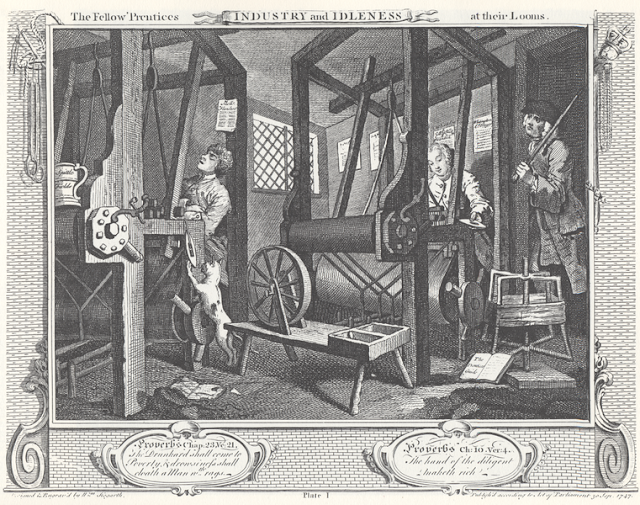 “The drunkard shall come to poverty, and drowsiness shall clothe a man with rags.” – Proverbs, chap. xxiii. verse 21.

A silk-weaver of Spitalfields has hired two apprentices. Although their work is the same, their personalities and attitudes couldn’t be more different. Francis is hard-working and diligent. He’s completely absorbed in his work, which he learnt how to do well by reading the “‘Prentice’s Guide,” which lies pristine at his feet. By the wholesome ballads of the London “Prentice, Whittingham the Mayor, eyc” that hang behind him, we understand that, when he’s not working, he’s employed in activities that improve his mind and spirit.

Thomas, on the other hand, likes his drink and dislikes his work. Overpowered by beer, he has fallen asleep right in front of his masters’ eyes. His copy of the “‘Prentice Guide”, which lies on the floor, is all torn and ruined, and not by excessive perusal but by neglect. On the wall behind him he hanged “The Ballad of Moll Flanders”, which shows us that, when he’s not working, he’s spending his free time in bad company, doing bad things that will bring him to his ruin.

THE INDUSTRIOUS ‘PRENTICE PERFORMING THE DUTY OF A CHRISTIAN 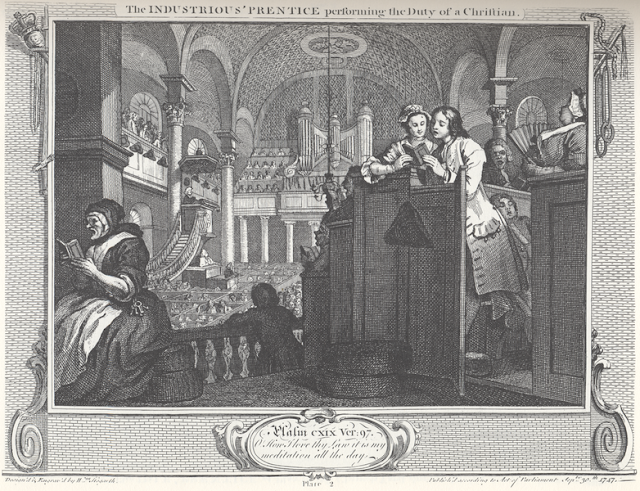 A devout Christian, the industrious apprentice is attending divine service in the same pew with his master’s daughter. Their singing out a hymnal. Next to them, a man is falling asleep, but is still “adding” to the music with his snoring. 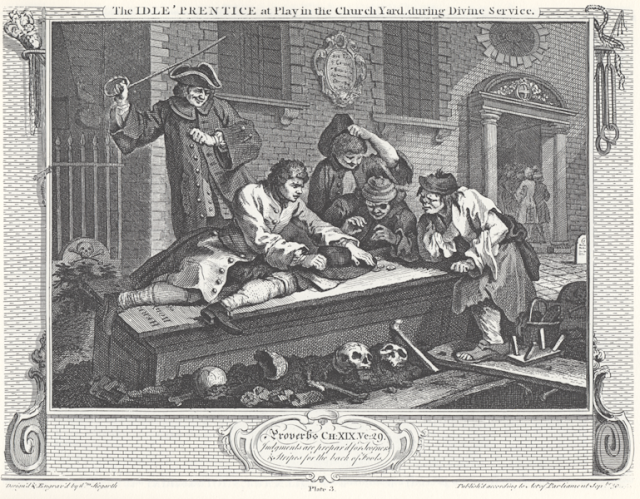 “Judgments are prepared for scorners, and stripes for the back of fools.” – Proverbs, chap. xix. verse 29.

Thomas has gone to church too, but not to pray. In fact, he hasn’t even set foot inside. He’s in the church-yard with a bunch of friends, gambling on a tomb-stone. The game they are playing is called hustle-cap, which was very popular at the time. Thomas is trying to cheat by concealing some of the half-pence under the broad brim of his hat. Not even the skulls and bones at his feet, or the beadle behind him, about to strike him with a cane for his tardiness and insolence can distract him from the game.

THE INDUSTRIOUS ‘PRENTICE A FAVOURITE AND INTRUSTED BY HIS MASTER 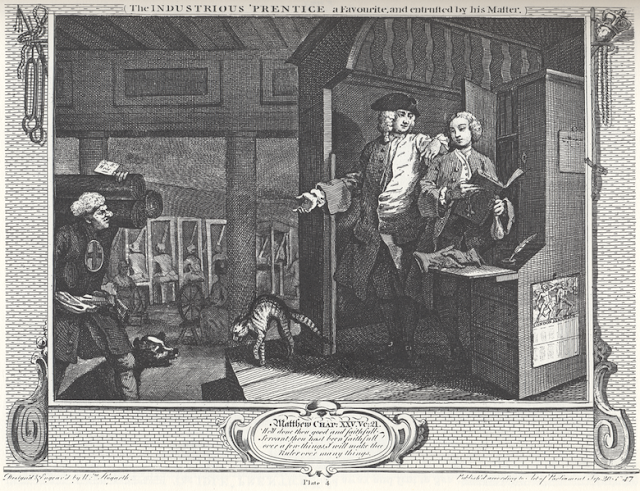 “Well done, thou good and faithful servant; thou hast been faithful over a few things, I will make thee ruler over many things.” – Matthew, chap. xxv. verse 21.

Thanks to his strong work ethic, deep piety, and steady conduct, Francis becomes a favourite with his master. He’s been promoted and is now in the counting-house, entrusted with the books, and receiving and giving orders. His master obviously trusts him with his money and gold, knowing Francis won’t cheat nor steal from him. The master is behind him, and has a hand on his shoulder, a pose that shows the two men like each other and get along well. The good feelings between the two men are also represented by the gloves on the desk. A plate of Industry Taking Time by the fore-lock reminds the viewer to make the best use of time before it quickly slips away.

THE IDLE ‘PRENTICE TURNED AWAY AND SENT TO SEA 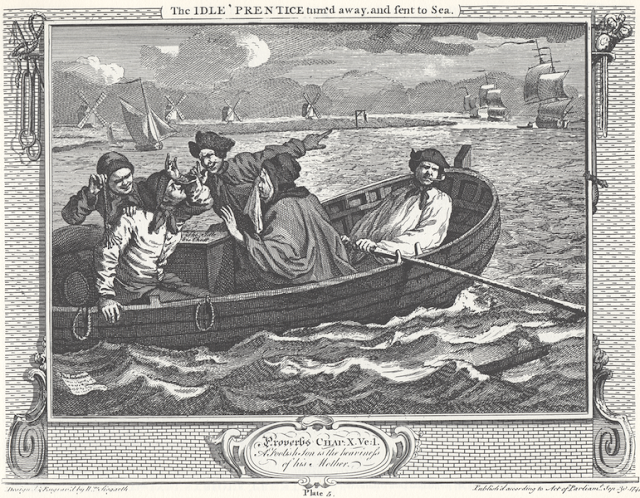 “A foolish son is the heaviness of his mother.” – Proverbs, chap. x. verse 1.

Tired of his idle apprentice, the master has fired him. Thomas has then been sent to sea, where, removed from his wicked friends and their evil influence, he’ll be able to reform his ways. In the plate, he’s making his way to the vessel in which he is to embark. His poor widowed mother, who has come to say goodbye, is sad at his departure. The waterman directs his attention to a figure on a gibbet, which will be his fate if he doesn’t change his ways. A body is showing him a cat-o’-nine-tails, which was used on ships to enforce discipline. But Thomas, rather than being moved by their sorrow and admonitions, makes fun of them, and even casts his indenture in the water.

THE INDUSTRIOUS ‘PRENTICE OUT OF HIS TIME, AND MARRIED TO HIS MASTER’S DAUGHTER 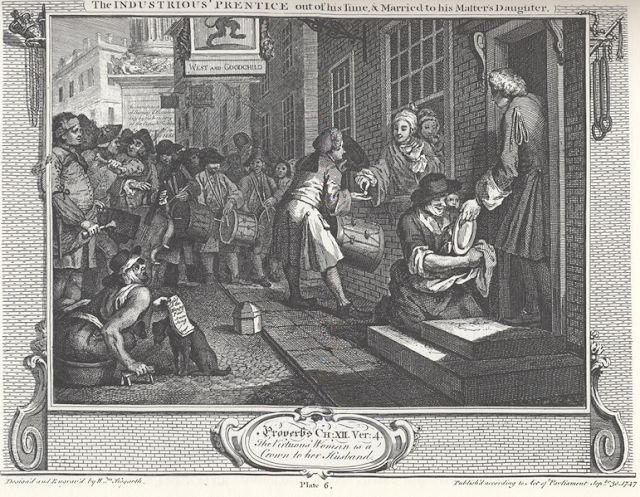 “The virtuous woman is a crown to her husband.” – Proverbs, chap. xiii. verse 4.

Francis has been rewarded for his virtue. Not only has he become partner with his master, but has even married his daughter. It’s the day after the wedding, as we can infer from Francis paying their drummers who, according to ancient custom, have come to congratulate the couple. Leftovers from the wedding feast are given to the poor.

THE IDLE ‘PRENTICE RETURNED FROM SEA, AND IN A GARRET WITH A COMMON PROSTITUTE 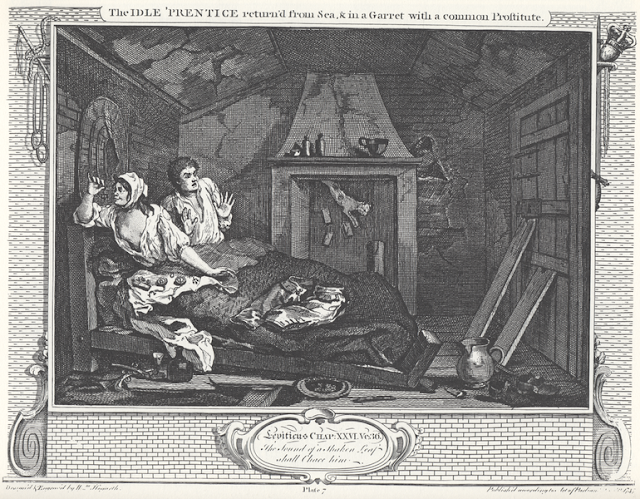 “The sound of a shaken leaf shall chase him.” – Leviticus, chap. xxvi. verse 26.

Thomas has returned from sea, but his long voyage has done nothing to change him for the better. On the contrary, rather than finding an honest job, he has become a highwayman.He is in bed with his partner, a prostitute, when the noise made by a few bricks dislodged from the chimney by the cat, which he mistakes for his pursuers, wakes him up. He’s scared, unlike his woman, who is too busy admiring a ring they have stolen to notice anything else. They’re hiding, as can be inferred by the planks against the door and lack of fire in the chimney. On the mantle-piece, we see a few bottle, which remind us of the diseases ever attendant on prostitution.

THE INDUSTRIOUS ‘PRENTICE GROWN RICH, AND SHERIFF OF LONDON 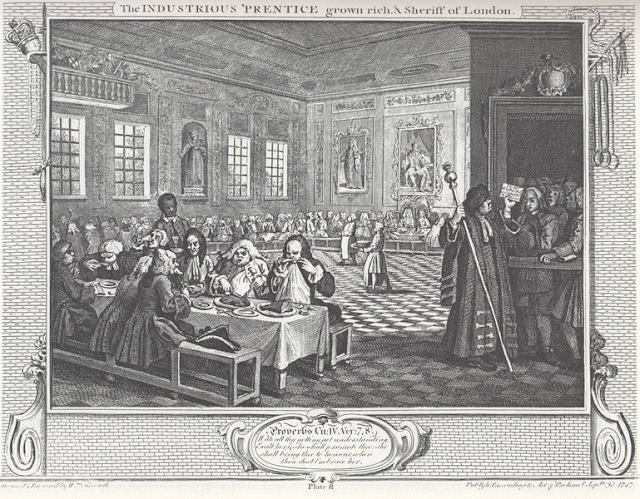 “With all thy gettings get understanding. Exalt her and she shall promote thee; she shall bring thee to honour, when thou dost embrace her.” – Proverbs, chap. iv. verse 7, 8.

This plate is a both a satire on gluttony and an example of the opulence hard work is rewarded with. The industrious and honest Francis has become sheriff of London, and is now dining with the different companies in Guildhall. Everyone is eating with gusto and enjoying their food. Musicians are playing to entertain the diners. The Chamberlain is reading a letter addressed to Francis Goodchild, Esq. Sheriff of London.

THE IDLE ‘PRENTICE BETRAYED BY A PROSTITUTE, AND TAKEN IN A NIGHT CELLAR WITH HIS ACCOMPLICE 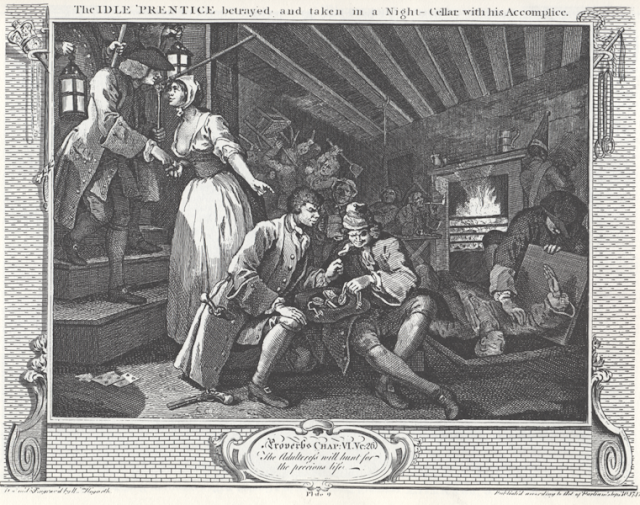 The idle apprentice turned highwayman is in Blood-Bowl House, a then famous house in Chick Lane, Smithfield, frequented by prostitutes, thieves, and murderers. Thomas and his accomplices have just killed a man, and while one of them is hiding his body underground, the others are dividing the booty. But he won’t be able to enjoy it. The prostitute we met in the previous plate is betraying him to a constable for one coin. Meanwhile, in the tavern, men are fighting in a brawl and a syphilitic woman without a nose is serving a mug of something. From the ceiling hangs a rope, an ominous reminder of the destiny that awaits the wicked.

THE INDUSTRIOUS ‘PRENTICE ALDERMAN OF LONDON; THE IDLE ONE BROUGHT BEFORE HIM, AND IMPEACHED BY HIS ACCOMPLICE 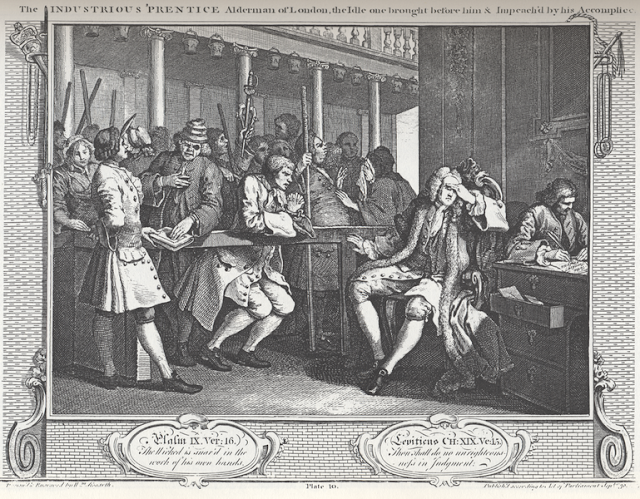 “Thou shalt do no unrighteousness in judgment.” – Leviticus, chap. xix. verse 15.

The two old apprentices meet again. Thomas is brought before the sitting magistrate, who turns out to be none other than Francis. Now that he is afraid for his life, he seems to repent his actions and the wicked company he kept, and is begging the magistrate for mercy. But the law is clear. There is no mercy for murderers. Only death. Thomas’s mother is pleading for his life too, but to no avail. In the meantime, a clerk is taking a bribe not to notice that a witness is swearing his oath with the wrong hand, thus making his testimony worthless.

THE IDLE ‘PRENTICE EXECUTED AT TYBURN 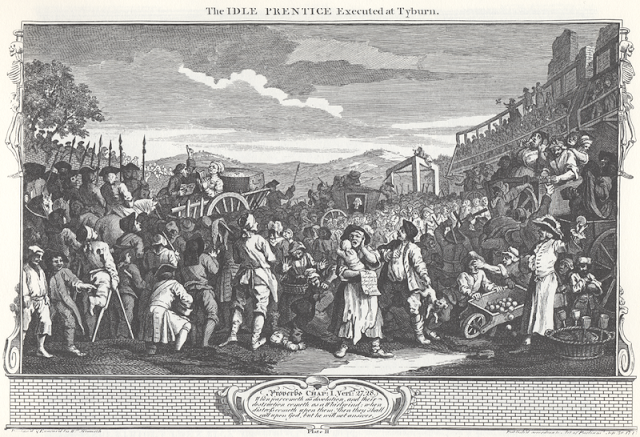 “When fear cometh as desolation, and their destruction cometh as a whirlwind; when distress cometh upon them, then shall they call upon God, but he will not answer.” – Proverbs, chapter i. verse 7, 8.

Thomas is being brought to the scaffold in a cart that also carries his coffin. He’s followed by the sheriff’s officers on horseback and an Ordinary in a coach, who is not very attentive to his duty. The crowd come to assist the execution is full of wicked folks too. A man picks the pocket of a man selling cakes. An old woman is drinking gin. A man is indecently helping up a girl into a cart. A solider sank up to his knees in a bog, while two boys are laughing at him. People are getting trampled over and hurt. A woman is beating a man for throwing down her child. The executioner is smoking up a pipe without giving a second thought to what he is about to do. A pigeon, which was bred at the goal, is let off and is flying back to Newgate. That was an old custom to give an early notice to the keeper and others, of the turning off or death of the criminal. 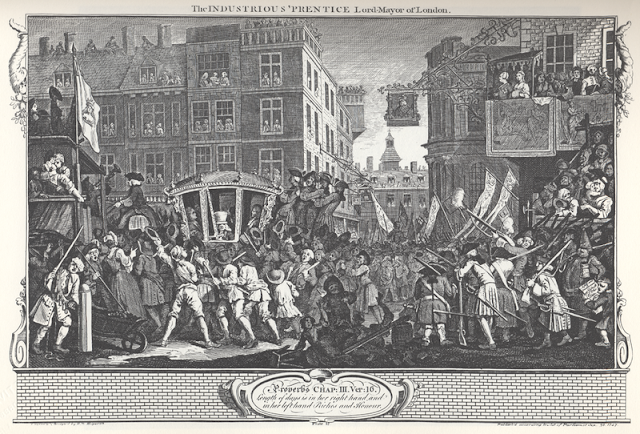 “Length of days is in her right hand, and in her left hand riches and honour.” Proverbs, chap. iii. ver. 16.

Francis’ fortunes keep rising. He’s now made Lord Mayor of London, the greatest reward that city can bestow upon him. He is riding in the Lord Mayor’s carriage, holding the sword of state and wearing an outsized top hat. The Prince and Princess of Wales are there too to assist at the ceremony. The crowd is drunken and rowdy. A boy is holding “A full and true account of the ghost of Thomas Idle,”, a reminder that both industry and idleness have got their reward.

Further reading:
The Works of William Hogarth: In a Series of Engravings With Descriptions, and a Comment on Their Moral Tendency by John Trusler