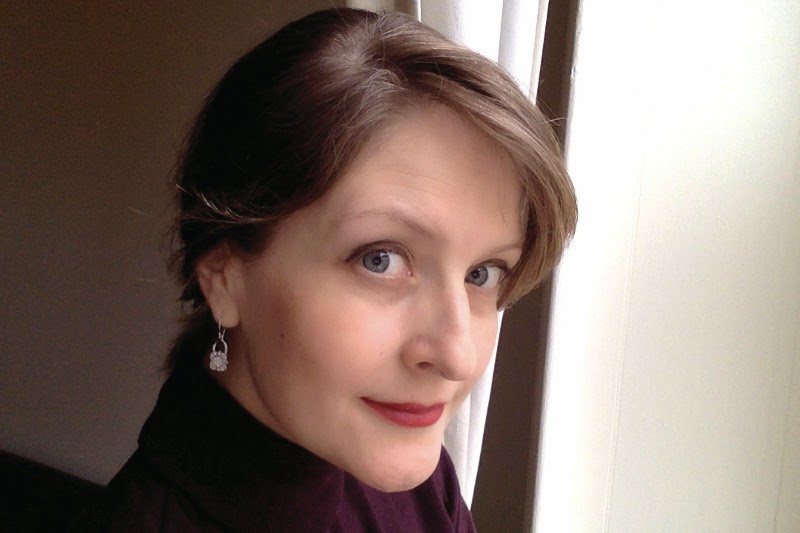 It’s a great pleasure today that I welcome to HAOT Greer Macallister, the author of The Magician’s Lie. Raised in the Midwest but now living on the East Coast with her family, Macallister is a poet, short story writer, playwright and novelist! She has just published her first novel, which tells the story of the Amazing Arden, a female illusionist accused of killing her husband. She has just one night to convince a police officer of her innocence. Will she succeed?

To find out what inspired Macallister to write The Magician’s Lie, what’s next for her, and a lot more, read on:

1. What inspired you to write The Magician’s Lie?
I was inspired by an absence. I realized one day that I’d seen countless references to a male magician cutting a woman in half, but never once seen anything about a female magician cutting a man in half. The image of stage magicians in our culture is almost completely male-dominated, but as with other male-dominated fields, there were definitely women who carved out their place in that world, against the odds. So I wanted to write about a female magician whose most famous illusion involved cutting a man in half, and decided to set it in a time when that would have been almost unbelievably shocking. The late 1890s and early 1900s turned out to be just the right setting.

2. Have you always been fascinated by magicians and illusionists? If so, why? Or was it just a coincidence that you ended up writing about one?
I do find magicians fascinating, although much of that is because of the parallel with writers – we’re creating something out of nothing, and we’re trying to get the audience (or reader) to care about something that they absolutely know isn’t true. If we do our jobs, people believe us even though they know we’re lying. It takes a special kind of talent to pull that off – a talent which I definitely don’t have in the stage magic department, but I hope I’ve been able to do with my words. That I ended up getting to explore the parallel between magic and fiction by writing a novel about an illusionist was kind of a happy accident.

3. Part of the story is based in Janesville, the Midwest city you grew up in. What has changed, and has anything stayed the same, since 1905, when the Amazing Arden visited it?
Because of the way the book is structured – many of the Janesville scenes are set in the police station, with just two characters present – readers don’t get to see a whole lot of the Janesville of the time. I can tell you one thing that’s absolutely the same, though: when I was growing up there, our police department was a single officer. That’s key to why I set the story up the way I did. Virgil Holt, who captures and interrogates The Amazing Arden, is the only police officer in the town. I wanted Virgil to be completely alone, and that makes him do all sorts of things he might not otherwise do.

4. Have you made any fascinating discoveries while doing your research that didn’t make it into the book?
I tried to pack as much of the fascinating stuff into the actual pages as I could! But there was so much about Adelaide Herrmann that just didn’t fit. If I was going to keep the book focused on Arden, I couldn’t get distracted with Adelaide’s real exploits, but there were many. Especially in the time before she enters Arden’s story, when she was traveling with her husband as his assistant. She was doing things that women of the time just didn’t do, like performing at the Russian court, and getting fired out of a cannon in South America. Totally crazy stuff.

5. What was most enjoyable, and what instead more difficult, about writing The Magician’s Lie?
I loved picking out historical details to include, and using them to draw readers into the world of the book. The way New York City would have smelled, for example. What dishes would have been served to visitors at the Biltmore. Real illusions that were done onstage at the time. I really love how historical fiction can just take you away to a time and place you know nothing about, and as a writer, I enjoyed creating that experience. As far as what was more difficult, there’s a not very nice central character in The Magician’s Lie, and spending time in his head was pretty unpleasant. You want your villains to be as richly imagined and three-dimensional as your heroes, but in order to do that, you need to think like they think. And that’s not always fun.

6. What is your writing process like?
Oh, it’s a mess. I tend to write a really fast first draft and then spend epic amounts of time revising it. And I’m not talking little revisions, either – throwing out thousands of words, ditching characters, inventing new ways to get from point A to point B, moving revelations from Chapter 20 to Chapter 2. It’s a very sloppy way to write a very structured book. I’m hoping I’ve learned enough to not do it next time, but we’ll see.

7. If you could invite three people, dead or alive, to dinner, who would you invite and why?
I’m absolutely paralyzed by choice if I let myself consider the whole wide-open field, so let me tell you which three magicians I’d invite to dinner. First, Neil Patrick Harris, because he is hilarious and sharp-witted and because I will never get over Doogie Howser, M.D. Also, Adelaide Herrmann, because she was so ahead of her time as a female stage magician, I’d love to ask her about her adventures, and I also want to know how much of her memoir is fact vs. fiction. Third, I’d invite Ricky Jay, who is an amazing sleight-of-hand magician who absolutely blew my mind when I saw him perform a few years ago. I’m sure he wouldn’t tell me any of the secrets of his act but I could just watch in rapture.

8. And, finally, what’s next for you?
Right now it’s mostly the planes, trains and automobiles of book tour, which I’m really enjoying. It’s wonderful to get to talk to real readers about the book after having it be just mine for so long. Book two is coming along – some of that plane and train time is good for writing – and hopefully it won’t be another five years before we see that one on the shelves. But I’m deep into the research and having a great time.

You can purchase The Magician’s Lie on Amazon. You can also keep up with Macallister on her blog and on twitter.