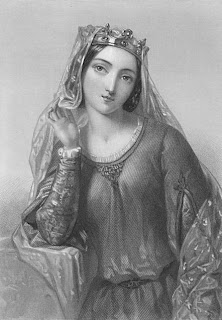 Born around 1188, Isabelle of Angoulême was the only daughter and heir of Aymer Taillefer, Count of Angouleme and his wife Alice of Courtenay. A beautiful woman with a volatile temper, Isabelle was betrothed to Hugh IX le Brun, Count of Lusignan, and son of the then Count of La Marche. Such an alliance would have united the lands of La Marche and Angouleme, creating a power block in the South of France and cutting off Aquitanie from the other English territories of Poitou and Gascony. King John I of England, whose first marriage to Isabel of Glouster had just been annulled, wouldn’t allow that and decided to marry Isabelle himself. He didn’t lose any time in making her his wife.

The wedding took place at Bordeaux on 24th August 1200 and, on 8th October they were crowned together at Westminster. Although he married her for political reasons, John was enthralled by his beautiful wife, even neglecting affairs of state to spend time in bed with her, which didn’t go down well with his people who were stunned by how quickly he acted and even had doubts about the validity of the union due to Isabella’s previous engagement to Lusignan. However, this doesn’t mean that John was faithful to his wife. Throughout their marriage, he kept having affairs. Two years after her wedding, Isabelle’s father died and the Queen of England also became Countess of Angouleme in her own right. She spent some time there, consoling her bereaved mother and ruling the province. 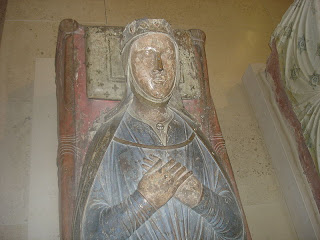 On 1 October 1207, Isabelle gave birth to a son, Henry II, at Winchester Castle. He was soon followed by 4 more children, Richard, Joan, Isabel and Eleanor, all of whom survived childhood. Although Isabelle was now a mother, her husband still treated her as a child, especially when money was concerned. Isabelle had lands of her own, but the money that was raised from them went straight to her husband, who only passed her an allowance and gave her some beautiful and sumptuous presents every now and then. Not only was Isabelle completely financially-dependent on her husband, she also didn’t issue any charters in her own name, something her predecessors had often done.

On 19 October 1216, John died and his son Henry was proclaimed King. Isabelle arranged his coronation and, a year later, went back to Angouleme, taking her daughter Joan with her. In 1220, Isabelle married Hugh X of Lusignan, who was Joan’s fiancé and the son of the man she herself had been betrothed to. They had nine children together. Isabelle may have been attracted to Hugh but she married him mainly because she needed someone to help her keep and exercise her rights in Angouleme. However, she hadn’t asked permission to marry him to the English council as the law dictated.

The English were furious. They stopped paying her pension and confiscated her dowry lands. Isabelle wouldn’t stand for this. She retaliated by threatening to keep Joan, who was betrothed to the King of Scotland, in France and make an alliance with the French instead. The English relented and her lands were restored to her. In 1244, she was accused of being involved in a plot to poison the French King and hastily fled to the abbey at Fontevrault, where she died two years later.