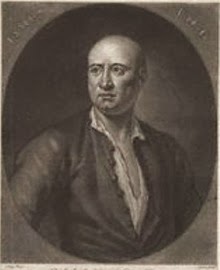 James Figg was the first English bare-knuckle boxing champion. He was expert in the use of swords, cudgels and quarterstaffs, and opened a school to teach his craft. But he also sold many shirts, despite claiming he had never bought one in his life. Here’s how he did it:

Chetwood in his History of the Stage relates the ingenious way in which Figg supplied himself with shirts at the expense of others. He told Chetwood that he had not bought a shirt for years. It was his practice when he fought in his Amphitheatre, to send round to some of his scholars to borrow a shirt for the ensuing combat. As most of the young nobility and gentry were in his train, he obtained a good many fine shirts from his admirers, the return of which was not accepted by the lenders, as they saw the cuts in the one Figg wore, and each man supposed this to be what he lent.

Further reading:
Hogarth’s London: pictures of the manners of the eighteenth century by Henry Benjamin Wheatley