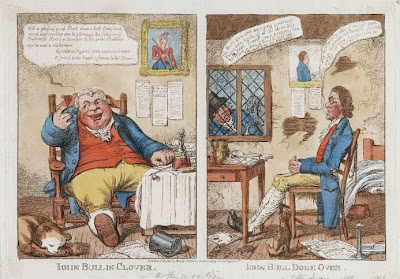 In 1819, England was facing an economic crisis. The conditions of the country were summed up in a double print, “John Bull In Clover” & “John Bull Done Over”, published by Fores on 9th January.

In the first print, a fat John Bull is having a great time. He’s smoking a pipe and drinking a glass of port which, he says, “enables one to go through the fatigues of business”. His dog, in the corner, is enjoying his dinner too. On the floor, lie scattered the invoices of goods dispatched by him to customers in Spain, in Russia, and in America.

On the walls, hangs a picture of “Good Queen Bess,” who had ruled the country over an age of prosperity. Underneath her portrait, John has pinned several of his favourite patriotic ballads: “The Land we live in,” “Oh, the Roast Beef of Old England!,” and “May we all live the days of our life.” John Bull is prospering and is praising the government policies that allow his business to thrive.

But those policies weren’t too sound after all, cos a few years later John Bull is done over. John has now become very thin and his clothes are old and torn in several places. He has also lost his shoes. His dog too has become skeletal. In vain, he asks his master for food, but John has nothing to give him. The only food in the room is an onion.

On the floor, the Gazzete announces his bankruptcy. His invoices are replaced by tradesmen’s bills. John is so desperate that he is thinking of committing suicide. He’s reading a treatise on it Next to the book, lies a razor, while, on the back of his chair, is a coiled rope.

And yet, the government is demanding even more money from him. At the window, a tax gatherer who has come to collect his property tax, ascertains whether John is at home. The poor man sighs, “Why, there’s very little of me left, sure enough you need not trouble yourself to call anymore. For that will be gone soon.”

On the wall, the pictures of Queen Elizabeth I has been replaced with that of John Bellingham, the assassin of the British Prime Minister Spencer Perceval. The patriotic ballads too have gone. In their place, doleful ditties, such as “Oh, dear, what can the matter be!” and “There’s nae luck about the house,” are pinned on the wall.