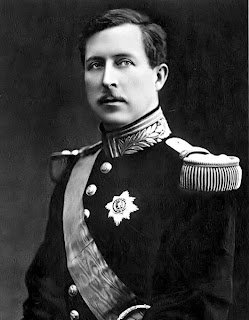 In his book, Albert The Brave, Lucas Netley relates several episodes of the Belgian King as a motorist. To quote:

He was swift to see the advantage of motoring, not only as a pleasant recreation, but also as a commercial asset in securing rapid transit of goods. Often he upheld worthily the chivalry of the road by coming to the aid of a fellow motorist. A car overturned in the neighbourhood of his Palace at Laeken brought the King and Queen quickly to the rescue. The King hurried off for medical assistance and the Queen rendered “first aid” to a woman who had been injured, and helped to carry her to a farmhouse.

There are many stories told of the King as a motorist. One which he relates himself occurred at Ostend. Muffled up and wearing goggles he was racing back to the Palace to be in time for dinner when he heard a shout behind him, and, pulling up his car with a grinding of brakes, he looked back to see a very irate policeman bearing down on him. In no uncertain language, this officer, not recognizing the motorist, asked him why he had not pulled up when signalled to do so. Contritely, King Albert pleaded that the street lamps reflecting on his wet windscreen had made vision difficult.
“All right,” replied the policeman, “I’ll let you go this time.” Then sarcastically he added : “I’ll see the King, and have the street lamps rearranged before you come this way again.”

Another story which showed King Albert’s kindness of heart is worth telling. One night, missing his car in Brussels, he told his equerry to fetch a taxicab from the rank. This official, disregarding the first vehicle on account of its dilapidated condition, signalled to the second one. At once the King stopped him. “Why not take the first one?” he asked.
“Because, sir, it is very old and dirty.”
“Never mind,” replied King Albert, “as it is such a dilapidated conveyance, its driver must be doing bad business; we must try and help him.”