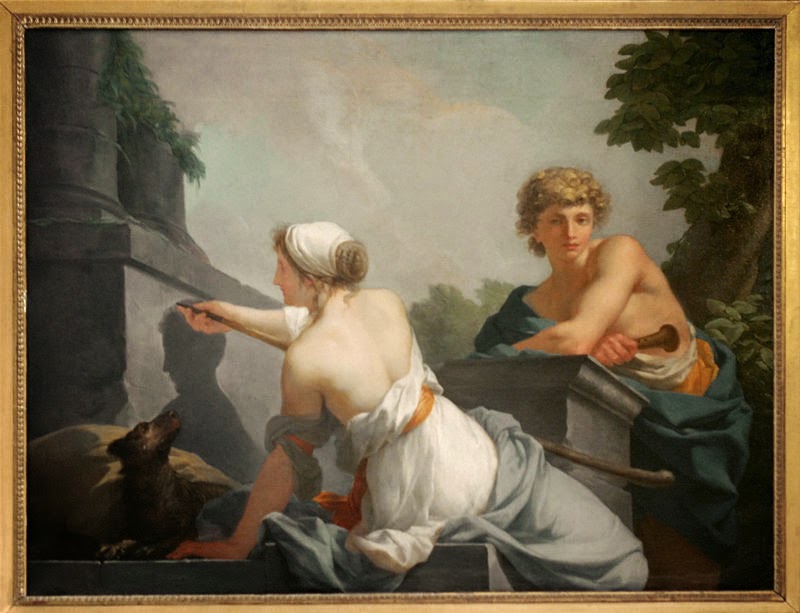 It is a well-authenticated fact that in the Greek city of Sicyonia, about the middle of the seventh century before Christ, there lived the first woman artist of whom we have a reliable account.

Her story has been often told, and runs in this wise: Kora, or Callirhoë, was much admired by the young men of Sicyonia for her grace and beauty, of which they caught but fleeting glimpses through her veil when they met her in the flower-market. By reason of Kora’s attraction the studio of her father, Dibutades, was frequented by many young Greeks, who watched for a sight of his daughter, while they praised his models in clay.

At length one of these youths begged the modeller to receive him as an apprentice, and, his request being granted, he became the daily companion of both Kora and her father. As the apprentice was skilled in letters, it soon came about that he was the teacher and ere long the lover of the charming maiden, who was duly betrothed to him.

The time for the apprentice to leave his master came all too soon. As he sat with Kora the evening before his departure, she was seized by an ardent wish for a portrait of her lover, and, with a coal from the brazier, she traced upon the wall the outline of the face so dear to her. This likeness her father instantly recognized, and, hastening to bring his clay, he filled in the sketch and thus produced the first portrait in bas-relief! It is a charming thought that from the inspiration of a pure affection so beautiful an art originated, and doubtless Kora’s influence contributed much to the artistic fame which her husband later achieved in Corinth.

In the latter city the portrait was preserved two hundred years, and Dibutades became so famous for the excellence of his work that at his death several cities claimed the honor of having been his birthplace.