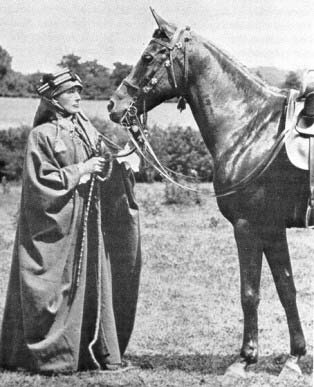 Lady Anne Blunt had two passions in life: horses and travelling. Together with her husband, the poet Wilfrid Scawen Blunt, she travelled extensively though the Middle East, buying Arabian horses from Bedouin tribesmen and the Egyptian Ali Pasha Sherif. To this day, most purebred Arabian horses trace their lineage to one of the horses the couple bought.

Born in 1837, Anne was the daughter of William King, first Earl of Lovelace, and his wife Ada, daughter of the poet Lord Byron and the first computer programmer. When Ada died, William started travelling the world, taking his 15 year old daughter with him. During these trips, Anne learnt several languages (she became fluent in German, French, Italian, Arabic, and Spanish) and passed the time sketching the scenery and landscapes she saw. She was a skilled artist. Her drawing teacher was none other than John Ruskin.

It was on one of these trips that she met her future husband, Wilfred Blunt. He was passionate about Middle Eastern Politics. She loved horses. Together, they decided to combine their interests to save the Arabian breed. To that end, after their marriage in 1869, the couple often travelled to that region. Anne recorded her experiences in a series of beautiful illustrated journals that can now be seen at the British Library.

In 1873, Wilfred inherited a family estate in Sussex. He decided to build a home, Crabbet Park, for his family there. But their home life was far from happy. Anne was often pregnant, but often suffered miscarriages. She gave birth four times, but only one daughter, Judith, survived to adulthood. Wilfred loved her dearly, but made no secret he would have much preferred a son.

The couple also quarrelled about horse management. In 1878, they had founded the Crabbet Arabian Stud. Although Wildred was the least passionate and experienced about horses, as the man he often made the decisions. He sent many precious horses in Egypt, under the care of inept managers who severely neglected them. As a result, several died of thirst and exposure.

They fared only a bit better at home. Wilfred was convinced that Arabian horses could only live under “desert conditions” even in damp and cold England. So, they didn’t often have enough to eat and were too exposed to the elements. His poor wife must have been horrified!

Blunt also had a lot of mistresses. This wasn’t unusual at the time and Anne was willing to tolerate it, to an extent. But in 1906, Wilfred went too far. He moved (and later adopted as his niece) his mistress Dorothy Carleton. That was the last straw for Anne. She wasn’t prepared to share her husband so openly, and decided to separate from him.

Under the terms of the separation, Anne got to keep Crabbet Park and half the horses, while Wilfred took Caxton Farm and the rest of the animals. She went to live with her daughter Judith and her husband near Crabbet Park, and spent the cold, long winters at her Shaykh ‘Ubayd near Cairo, which she had purchased with her husband in 1882 to set up a breeding farm.

In October 1915, she left England for good. She left the management of the Crabbet Estate to her daughter, and moved permanently to Shaykh ‘Ubayd. She died in Cairo two years later.