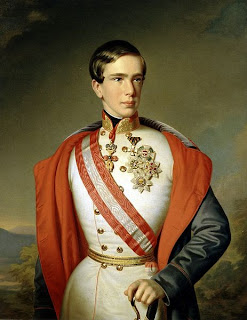 In a letter to his niece, Queen Victoria, dated 3rd June 1853, King Leopold I of the Belgians shares his impressions on the Austrian Emperor, Francis Joseph. Here’s an excerpt from the letter:

The young Emperor* I confess I like much, there is much sense and courage in his warm blue eye, and it is not without a very amiable merriment when there is occasion for it. He is slight and very graceful, but even in the mêlée of dancers and Archdukes, and all in uniform, he may always be distinguished as the Chef. This struck me more than anything, as now at Vienna the dancing is also that general mêlée which renders waltzing most difficult…. The manners are excellent and free from pompousness or awkwardness of any kind, simple, and when he is graciously disposed, as he was to me, sehr herzlich und natürlich.

He keeps every one in great order without requiring for this an outré appearance of authority, merely because he is the master, and there is that about him which gives authority, and which sometimes those who have the authority cannot succeed in getting accepted or in practising. I think he may be severe si l’occasion se présente; he has something very muthig. We were several times surrounded by people of all classes, and he certainly quite at their mercy, but I never saw his little muthig expression changed either by being pleased or alarmed.