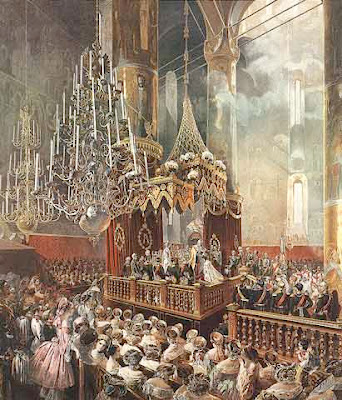 In 1856, Earl Granville attended the coronation of Czar Alexander II of Russia. He noted down his impressions on the new ruler and its country in a letter to Queen Victoria. Here it is:

Lord Granville’s conversation with the Emperor of Russia, and what he has heard from various reliable sources, have led him to the following conclusions respecting His Imperial Majesty.

He is handsome, but thinner and graver than when he was in England. When speaking with energy to Lord Granville his manner seemed to be rather an imitation of some one else than his own, and he did not look Lord Granville in the face. His usual manner is singularly gentle and pleasing. He does not give the idea of having much strength either of intellect or of character, but looks intelligent and amiable. Although the education of a Cæsarwitch must be subject to pernicious influences, the present Emperor has had advantages which those in his position have not usually had. The Emperor Nicholas came to the throne without having had the confidences of his predecessor. He initiated his son into everything that was going on, while others who knew the good-nature of the Grand Duke Alexander’s character, told him that which they did not tell his father. He was supposed to have different tastes from the late Emperor, but, since the death of the latter, he has liked the late Emperor’s favourite residence which he himself had formerly disliked, he has taken to all the military pursuits of his father, and is said to have shown undignified haste in issuing regulations about, and in appearing in, new uniforms. He is liked by those who surround him, but is blamed for not having those habits of punctuality and of quick decision in business which characterised the late Emperor.

There is still much talk of stimulants to be applied by His Imperial Majesty to commerce and to the development of the resources of the country…. There are persons, however, here well qualified to judge, who doubt whether much more will be performed than has formerly been done, after brilliant promises at the beginning of a reign. His Imperial Majesty is not supposed to have that power of will which will enable him to deal with the mass of corruption which pervades every class in this country. The Empress*, a woman of sense and ability, is believed to have great influence with her husband when he is with her, but he is generally guided by the person who speaks last to him before he acts—and His Imperial Majesty has not the talent of surrounding himself with able men. His Ministers certainly do not appear to be men of that remarkable intellect as have been usually supposed to be employed by the Court of St Petersburg. Count Orloff is stated to have but little influence, and to have lost his former activity. Prince Gortschakoff is clever in society, of easy conversation and some smartness in repartee. He is vain, a great talker, and indiscreet. It is difficult to keep him to the point. He flies about from one thing to another, and he is so loose in his talk, that the repetition of isolated phrases might lead to impressions of his meaning, which would not be correct….

The Serf Question is admitted by all to be of a very difficult character, and will become more so as the wealth of the country increases. Indeed when that state of things occurs, it is more than likely that popular movements will take place, and it is frightful to consider the immediate results of a revolution in a country organised as this is at present. No country in Europe will furnish so fair a chance of success to Socialism. The reins of Government were held so tight during the last reign, that even the relaxation which now exists is not altogether without danger.

The preparations for the Coronation are on an immense scale. The present estimate of the expenses is £1,000,000; the last Coronation cost half that sum; the Coronation of Alexander, £150,000; while that of the Emperor Paul did not exceed £50,000. The military household of the present Emperor consists of one hundred and twenty generals—that of Nicholas, at the beginning of his reign, consisted of twenty.

Your Majesty is spoken of by the Emperor and by the Society here with the greatest respect. Lord and Lady Granville have met with nothing but remarkable civility from all classes.

Lord Granville has had great pleasure in seeing His Royal Highness Prince Frederick William of Prussia in such good health and spirits. His only anxiety was an interval of fourteen days during which His Royal Highness did not hear from England. That anxiety has been relieved by a letter received to-day. Lord Granville ventures to request your Majesty to present his respectful remembrances to the Princess Royal with his congratulations at Her Royal Highness’s complete recovery. Lord Granville begs to advise Her Royal Highness, when residing abroad, not to engage a Russian maid. Lady Wodehouse found hers eating the contents of a pot on her dressing-table—it happened to be castor oil pomatum for the hair.

Lord Granville has been requested to convey to your Majesty and to His Royal Highness Prince Albert the Prince of Nassau’s expressions of devotion and respect. The atmosphere in which His Highness at present resides does not appear to have had much influence on His Highness’s opinions.