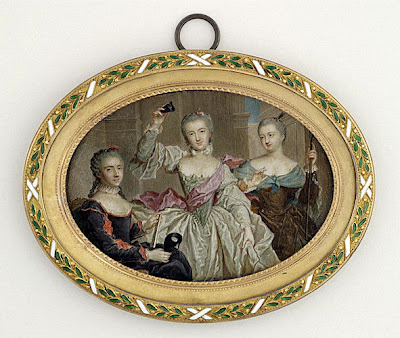 Louis XV saw very little of his family. He came every morning by a private staircase into the apartment of Madame Adelaide. He often brought and drank there coffee that he had made himself. Madame Adelaide pulled a bell which apprised Madame Victoire of the King’s visit; Madame Victoire, on rising to go to her sister’s apartment, rang for Madame Sophie, who in her turn rang for Madame Louise. The apartments of Mesdames were of very large dimensions. Madame Louise occupied the farthest room. This latter lady was deformed and very short; the poor Princess used to run with all her might to join the daily meeting, but, having a number of rooms to cross, she frequently in spite of her haste, had only just time to embrace her father before he set out for the chase.

Every evening, at six, Mesdames interrupted my reading to them to accompany the princes to Louis XV.; this visit was called the King’s ‘debotter’,—[Debotter, meaning the time of unbooting.]—and was marked by a kind of etiquette. Mesdames put on an enormous hoop, which set out a petticoat ornamented with gold or embroidery; they fastened a long train round their waists, and concealed the undress of the rest of their clothing by a long cloak of black taffety which enveloped them up to the chin. The chevaliers d’honneur, the ladies in waiting, the pages, the equerries, and the ushers bearing large flambeaux, accompanied them to the King. In a moment the whole palace, generally so still, was in motion; the King kissed each Princess on the forehead, and the visit was so short that the reading which it interrupted was frequently resumed at the end of a quarter of an hour; Mesdames returned to their apartments, and untied the strings of their petticoats and trains; they resumed their tapestry, and I my book.

During the summer season the King sometimes came to the residence of Mesdames before the hour of his ‘debotter’. One day he found me alone in Madame Victoire’s closet, and asked me where ‘Coche'[Piggy] was; I started, and he repeated his question, but without being at all the more understood. When the King was gone I asked Madame of whom he spoke. She told me that it was herself, and very coolly explained to me, that, being the fattest of his daughters, the King had given her the familiar name of ‘Coche’; that he called Madame Adelaide, ‘Logue’ [Tatters], Madame Sophie, ‘Graille'[Mite], and Madame Louise, ‘Chiffie'[Rubbish]. The people of the King’s household observed that he knew a great number of such words; possibly he had amused himself with picking them out from dictionaries. If this style of speaking betrayed the habits and tastes of the King, his manner savoured nothing of such vulgarity; his walk was easy and noble, he had a dignified carriage of the head, and his aspect, with out being severe, was imposing; he combined great politeness with a truly regal demeanour, and gracefully saluted the humblest woman whom curiosity led into his path.